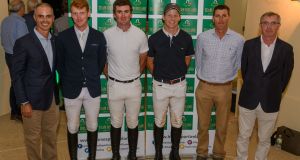 Ireland’s show jumping riders are competing at five international venues this weekend with most interest focused on Wellington, Florida where a four-star Nations’ Cup competition takes place on Saturday at the Palm Beach International Equestrian Centre.

Bidding for a hat trick of successes, Ireland finished as runners-up to Britain in the Wellington Nations’ Cup last year and Blake is confident of another good result saying: “We will be expecting a podium finish while hoping for a win. We are trying out a few new combinations and all the horses are jumping in their first Nations’ Cup.

“My job obviously is development and if you don’t experiment then you don’t develop so I hope I have made the correct choices and that these guys are ready. If we go with the same horses and the same riders in every Nations’ Cup then we can’t grow and we can’t expand.” The Wellington Nations’ Cup gets underway at 12 midnight Irish time on Saturday.

Blake named his squad at Wednesday night’s reception for owners and supporters of the Irish show jumping team at Trawney Farms in Wellington. During the reception a special presentation was made to Lisa Lourie of Spy Coast Farm for her contribution to the industry and her support of Shane Sweetnam.

Week eight of the Winter Equestrian Festival got under way earlier that day. There have been no international wins as yet for Irish riders but Daniel Coyle partnered his own Irish Sport Horse mare, CHS Krooze (a nine-year-old by Kroongraaf), into fourth place in Thursday evening’s Under 25 1.45m speed class while, riding Southern Arches’ Charlie, Lorcan Gallagher finished fifth in the afternoon’s 1.50m speed class.

The lucrative Global Champions Tour and League have commenced at Doha in Qatar and will take in some of the world’s most iconic show jumping venues before finishing in September in New York after which there will be play-offs in Prague in November. Seven of the 16 teams in the League have Irish riders listed for the season.

Next week, Doha will be the venue for an international dressage show to which Para Equestrian Ireland is sending a team in a bid to secure Olympic qualification. Those selected to travel are Rosemary Gaffney, Kate Kerr Horan, Tamsin Addison and Michael Murphy.