Sonia O’Sullivan: Next generation of Irish athletes growing up fast

Likes of John Fitzsimons, Gina Apke-Moses and Michaela Walsh on the right track 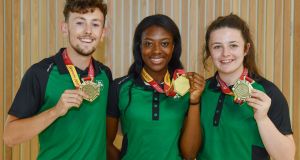 Medalists John Fitzsimons (bronze in the men’s 800m) Gina Akpe-Moses (gold in women’s 100m) and Michaela Walsh (bronze in the Hammer) at the homecoming of the Irish team from the European Athletics Under-20 Championships in Italy. Photograph: Sam Barnes/Sportsfile

Four has always been something of a magic number in athletics. Only not quite when it comes to the four Irish athletes that will compete inside the London Olympic Stadium at the World Championships, which get under way on Friday week.

It’s a little surprising, and doesn’t quite add up. There are another seven – between the men’s and women’s marathons and the men’s 20km/50km walks – who get to compete around the streets of London. Still that team of 11 makes for only a very small cross-section of what should be a wider body of Irish athletics.

At least those four on the track seem to be going well – Brian Gregan, Mark English, Thomas Barr and Ciara Mageean all showing their class when winning national titles in Santry at the weekend.

So nothing about their qualification should really be that much of a shock, as these four are currently the best Irish athletes. What is concerning is that there is no back-up squad, no track or field athletes that may not be at the level to reach a final yet, but would learn some considerable lessons from the experience.

It’s not that the World Championships standards are any more difficult; in fact in a number of events those standards have been reduced.

It could be some of the desire to be in London is missing. The allure of the World Championships seems to have worn off in Irish eyes, even when they will be held so close to home in the London Olympic Stadium.

The Olympics still has a greater attraction and there is a noticeable drop off in the desperation to qualify the year after an Olympic Games. There is a natural comedown.

But when you think that the next World championships, in 2019, will be held in Qatar in horrendous conditions – no matter where athletes are coming from – this may well be a missed opportunity for athletes to compete on the world stage, in ideal conditions, in front of a packed stadium.

This all contrasted with my thoughts just a few weeks ago at the Irish juvenile athletics championships, staged in Tullamore. Again I was a little surprised – in a pleasant sense – such was the depth in numbers competing and the high standards of competition. I began to see hope for the future, but at the same time wondering where do they all go to?

There is so much talent and energy within Irish athletics underage clubs throughout the country: you do however have to question what happens in those years after school. It is like stepping into a void, and very few seem to survive, in athletics terms at least.

There was hope again last weekend while watching the European Junior Championships, which took place in Grosetto, Italy. This is a true benchmark for the future of athletics. So many young European athletes pass through these junior championships and go on to win medals at senior level at European, World and Olympics further into their athletic careers.

And this turned out to be the best ever representation at the European Junior Championships by an Irish team. I had just arrived back in Australia, but I was quite happy to wake up at 4.0am and switch on Eurosport, in the cold and darkness, so that I could catch up on the continual stream of Irish athletes qualifying to the finals.

This has not been a common occurrence in recent times; they were not just making finals, but you got the feeling there was always more to come.

There was a hunger and desire that is sometimes missing at the senior level, where athletes can fall into the comfort zone, living the life of a professional athlete. There are often many rewards along the way that athletes want to hang onto and not take risks that could negate their current standings.

I was most impressed with John Fitzsimons in the 800m. It took a personal best 1:48.68 to make the final. This is something we often talk about. You can’t look beyond the qualifying rounds of a championship.

So often the first round could be the only round, so it has to be run as a final to have any chance of making the final. What John did to qualify for the final was textbook perfect; do everything you can, run faster than you’ve ever gone before, worry about the final when you’re in it.

The young Kildare man certainly didn’t worry about the final, but looked to grab the opportunity with both hands and run with it. Sometimes these chances come along, gaps open up and you get in a break but you have to be prepared to just go with the flow and not worry what’s going on behind you.

After already seeing Gina Apke-Moses take the gold medal in the 100m final, backed up by Ciara Neville also making the final, then Michaela Walsh claiming bronze in the hammer throw, you get the feeling everyone wanted to be a part of the action, and more importantly get close to the medals.

Overall Ireland placed in the top-eight positions 10 times, across eight different events, and that is certainly a very encouraging statistic to build on and grow towards the future.

So there is a new wave of young athletes coming along, across a variety of events. That challenge now is to make sure they are nurtured through the void that awaits them, or whatever other hazard of obstacles they are faced with along the way.

It is rarely plain sailing, but if they can overcome any hurdles and are allowed as smooth a transition as possible then there is no reason not to expect them to go on to even greater achievements at senior level.

Sometimes we can also expect too much from young athletes, when it can take up to seven years to grow a junior to be strong and competitive on the same stage at the senior level.

So often we see a glimmer of hope and expect too much too soon. It is a long tough road, going through the winter season each year, never knowing how you will be the following year. One year older doesn’t always mean one year stronger.

In three years’ time, many of these junior athletes could be on the cusp of Olympic qualification for Tokyo 2020, and after another positive few steps along the way it’s not unrealistic. With a European Championships in Berlin next year, those 2017 World Championships one year later, there is a natural progression towards those Tokyo Olympics.

The European Youth Olympic festival is also taking place this week in Gyor, and by day two Ireland had picked up two athletics medals in the girls 100m, won by Patience Jumbo-Gula, and in the hammer, by Jade Williams. Again, the new generation of Irish athletes, in every sense.

When you have a strong foundation of young athletes like this it’s hard to fathom how Ireland can have such a small senior representation at the World Championships. These things do go in cycles but you have to hope that in the next few years with the right mindset and direction as these young athletes develop and grow, so too will the quantity and quality of Irish senior athletes.