Every day this week, Mary Hannigan looks at some of the highlights in women’s sport from the last 30 years. Part one looks at 50 to 41 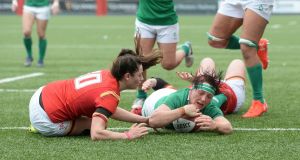 It started out as just a bit of fun, a rule-free spot of reminiscing, a list of 50 memorable moments produced by Irish sportswomen. But then a hurdle or two got in the way.

Like, ‘how many places in the top 50 has Sonia taken so far?’

‘How far are we going back?’

‘Well, there was Lena Rice winning Wimbledon in 1890.’

So, for fear of it turning in to a top 550, we narrowed our moments to the last 30 years, and to just one per sportswoman.

Other than that, no rules apply, it’s an entirely unmethodical browse through three decades of landmark moments and sporting excellence, in team and individual sport, on the home and international front.

We’ve no doubt missed some very obvious choices, so advance and profuse apologies are offered, but here we go with part one, from 50 to 41.

The ball was pink, it had a “soft touch for a woman’s grip and ‘Eazi Play’ for a woman’s ability”. A fair chunk of those who viewed the ad came close to melting down, the gist of the response: ‘WTF?’ If the aim of the ‘hoax’ ad was to provoke discussion, it worked a treat.

Opinion was furiously divided on the method chosen, but there was unanimity on the goodness of the news that came at the end of the campaign: Lidl were sponsoring women’s Gaelic football, investing €1.5 million in year one of a three-year deal. As big an investment in women’s sport as anyone could remember. And they didn’t even have to use the Ladyball.

There have been more than a few trailblazers on the female officiating front, among them Gaelic football’s Maggie Farrelly and soccer’s Michelle O’Neill, but not many have climbed as many rungs on the ladder as rugby’s Helen O’Reilly.

After making history by becoming the first woman to referee an All-Ireland League game, the Dubliner achieved another first in 2014 when she was added to the IRFU’s National Referee Panel. There’ve been lots more firsts since then, including last year when she became the first woman to officiate in the Guinness Pro12, running the line in the game between Munster and Zebre at Thomond Park.

After Laois had lost eight All-Ireland finals between 1985 and 1996, Ramsbottom, a member of the Army and former aide-de-camp to president Mary McAleese, looked destined to finish her career without a winner’s medal. And for a player regarded as one of the game’s greats, with seven All Stars to her name, that would have been cruel.

But all the pain was erased in 2001 when Ramsbottom, top scorer through the Championship with 7-17, led her county to victory over the three-in-a-row seeking Mayo, the winning point coming in the dying seconds.

The Cavan woman, who played Gaelic football for her county, went backpacking to Australia 10 years ago and still hasn’t come home. In February of this year she became the first Irish player to appear in the inaugural women’s Australian Football League when she lined out for Melbourne FC against the Brisbane Lions in front of a crowd of 6,500 at Melbourne’s Casey Fields. And they’ve signed her up again for another season.

If cyclists Katie-George Dunlevy and Eve McCrystal ever need to be reminded of how they felt when they were informed that they had won gold in the Time Trial at the 2016 Paralympics in Rio, they need only glance at Diarmuid Greene’s award-winning photo. Sheer ecstasy, and no little exhaustion. The most memorable of moments captured majestically.

The Armagh woman’s sporting schedule is the stuff of legend, often turning out for eight teams (club, college, county, province and country) in the course of a year in Gaelic football and netball. A four-week spell in the summer of 2014 was especially busy, O’Hanlon leading Armagh to their first Ulster title in seven years, then zipping over to Glasgow to captain Northern Ireland’s netball team at the Commonwealth Games, before coming back to score 2-6 and take the player of the match award in the All-Ireland quarter-final win against Laois. She finished the year with her third All-Star and the Footballer of the Year award. All the time training to be a doctor.

The Swords woman has represented Ireland at a staggering seven Paralympics since 1992 across a range of sports - Pentathlon, cycling and athletics (200m, 400m, discus, long jump) and, in Rio, with her co-pilot Fran Meehan, became the first woman to represent Ireland in the Triathlon when it made its Paralympic debut. She won bronze in the Pentathlon at Sydney 2000 but it was 12 years later in London that she had her most memorable Games, winning cycling silver and bronze in the Time Trial and Individual Pursuit.

There are plenty of all-rounders in Irish sport who have excelled in two or three disciplines, but Peat would probably regard that as being idle. Having won an All-Ireland football title with Dublin in 2010 and represented Ireland in soccer and basketball, she began winding down. But then she took up rugby, like you do, and made her international debut against England in 2015 when she was 35.

If the Dubliner had any doubts about what she might be able to contribute to her new sport she got her answer in May of this year - her team-mates voted her Player of the Year. Next stop in a remarkable sporting career? The Rugby World Cup.

When it came to attempting to qualify for the Olympics, the Donegal woman’s list of near misses in both rowing and cycling was soul-destroying, the most agonising coming in 2004 when she and her double sculls partner Heather Boyle missed out on qualification by one-hundredth of a second. She’d enjoyed plenty of success outside the Olympics, including a World Championship Lightweight Single Sculls gold in 2001, but after having three children and all but retiring from sport the Olympic dream looked over.

But then she teamed up with Claire Lambe in the double sculls and after only 10 weeks of training together headed to the World Championships in France where she qualified for Rio. “Pure joy,” said the 39-year-old who went on to reach the Olympic final with Lambe.

A group of internationals choosing to publicly air their grievances about their shabby treatment at the hands of their governing body shouldn’t really be a memorable moment at all, just a perfectly logical step. But so loudly applauded were the Irish footballers for taking on the FAI earlier this year, especially by fellow sportswomen, it was an indication of just how big a step it was.

Having to change out of their tracksuits in airport toilets so the gear could be made available to underage teams was, for most, the last straw. After their initial abysmal response to the complaints, the FAI addressed the issues raised and the row was resolved to the players’ satisfaction.

Part Two, counting down from 40 to 31, will be published on Wednesday.