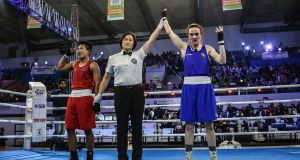 Ireland’s Kellie Harrington has her hand raised after getting a split decision to win gold at the World Women’s Elite Championships in New Delhi, India. Photograph: AIBA

In an absorbingly tight three rounds of boxing Harrington swung it her way with three judges giving it to the Irish woman and two favouring the Thai boxer.

It is a second world championship medal for Harrington, who also won silver at the 2016 world Championships in Kazakhstan when she fought at the heavier light welterweight division.

Once again Harrington, as she did in her semi-final, showed composure and discipline against a very strong opponent, who had a big left backhand behind a strong jab, which was constantly on a hair trigger.

It was also Seesondee who eliminated Mira Potkonen earlier in the week. Potkonen won a bronze medal when she defeated Katie Taylor in the 60kg category at the 2016 Rio Olympics, Finland’s only medal at the Games.

It took exceptional boxing from Harrington and in the end it came down as much to Irish boxer’s superb defence. Often swaying out of the way of the of Seesondee’s combinations, Harrington scored in flurries before moving out and boxing from a distance.

No question all three rounds were tight as the contest grew to an all-out third. Moving throughout and keeping her left jab busy, Harrington was the go-forward boxer in the first round before Seesondee stepped up the tempo in the second. Even then it was difficult to separate the two.

More set in her stance, Seesondee may have been the stronger, but the Irish lightweight didn’t allow her opponent to lock her into a punching duel.

Both boxers were landing and in the end it was Harrington who seemed to get through more often, her left finding the target area and Seesondee too often wide of the mark.

It is a stunning success for Harrington and her team, led by coach Zaur Antia. She dropped to the lower 60kg weight when Taylor turned professional so that she could qualify for the Tokyo Olympic games in 2020. That is now a very realistic target.

She is just the second woman in Irish boxing history, after Taylor’s five wins, to win a World Championship gold medal.

Tuilagi case shows England’s home-based clause is out of date 16:48
Cam Newton broke the mould: Can his flame be rekindled at the Patriots? 12:12
Pete Sampras: The forgotten great with the best serve in the business 11:10
Simmons: England West Indies series a blueprint for cricket 10:17
Different Strokes: Frankie leaves Fleetwood for Hollywood 10:00
Here is your handy guide to sport on television this week