Why more women are needed on Irish sports boards

Decision-makers and money-granters are overwhelmingly male. This needs to change 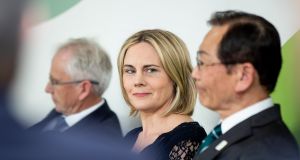 Women’s participation in sport is slowly creeping up, but where are the women on sports committees and boards? Decision-makers and money-granters are overwhelmingly male and unless this changes, the current wave of girls’ sport may never reach land.

Less than one in four people on Irish sports boards are women and the same for paid female CEOs. How can sports move women’s participation forward if they’re not happy with women at the top table?

Game of Thrones fans will be familiar with Varys’s take on power: power resides where men believe it resides. And the power in sport, whether we acknowledge it or not, lies in late-night or weekend-morning clubhouse meetings where decisions affecting players are taken.

Promoting women in sport has to be about more than the players – women should be giving out cups, acting as technical directors, developing strategy. Women should be signing the cheques and putting their name on grant applications to benefit athletes of both genders.

There was talk in 2016 at government level of gender quotas for sports boards, more than talk. It frightened a lot of people, it frightened them so much the whole idea just went away.

So instead the new and ambitious policy for women’s sport from Sport Ireland includes an aim to “recognise and reward NGBs [national governing bodies of sport] who have achieved gender diversity at board level”. Essentially, it’s sports saying yes, we will support women but only if you pay us. Public outcry: zero.

Smart move by Sport Ireland but eye-roll emoji for the doublethink from the backroom system.

Commentators said quotas would be unfair. It’s unfair women in male-dominated sports like rugby and soccer had to wait so long for basics while wearing sub-standard gear and taking the train across Europe to matches. It’s unfair female competitors at large events share one toilet because no one thought to open more.

Women aren’t automatically governance angels but they would bring issues like this to the table. If you’re a woman you see other women, and this leads to new discussions at the table.

Other people said women taking roles under gender quotas would be heavily scrutinised. You had to wonder if some of them have ever been around sport at all – any woman trying to do anything other than boil a pot of tea or wash a jersey is heavily scrutinised, but they get on with it.

It’s time to take it up now from players and referees to committee membership. This is the most effective way to sustain the current improvements. It’s important so many sports have roles like women’s development officers, but true equality will come from working towards a woman as chair or CEO at club and national levels.

Many men have trained and supported sportswomen for decades, without their pioneering acceptance we wouldn’t be where we are today. Now it’s time for their administrative peers to open the committee doors.

It’s not that we don’t have examples in Ireland of women running sports successfully. Camogie and Ladies Football are independent of the GAA, for now at least. They’ve enticed companies like Lidl and Liberty Mutual on to the pitch along with that record 50,141 fans on to seats for the football final.

In 2015 the Camogie Association looked at who was running their sport and found 78 per cent of the volunteers at club and county levels are women.

Is it so hard to imagine that women in sports where the players are of both genders could add value to the set-up? Unfortunately, the figures say yes. Yes, it’s almost impossible for Irish sports to accept the idea of a woman someday sitting where John Delaney so recently sat for example.

Thankfully there are chinks of light for any girl coming up to follow.

Tracey Kennedy heads Cork GAA, the only female county chair working with the men’s games. And only the second ever following Roisin Jordan in Tyrone.

Is it a coincidence that since Kennedy took over the possibility of the Cork Ladies Football team finally getting a run on Páirc Uí Chaoimh has come closer? She pushes the question away saying a lot of people are involved but she does say it’s not a coincidence.

It’s not a coincidence. A fan turned administrator, nothing unusual about that except she sees something different. It’s not about being better, but just seeing something different; in this case seeing women as athletes deserving of an exciting chance.

Sarah Keane, head of the Olympic Federation of Ireland, broke a few glass ceilings on her way up. She also talks about diverse thinking and opening pathways for women other than as players. Her take is make the tea if that is where you want to be, but if you know how to design an athletics course then find a way to do that instead.

Kennedy says she’s been supported by male mentors without reservation. But she adds half-jokingly that if the Dubs were presented with a woman to carry on from Jim Gavin, there would be outrage.

Her suggestion for women who want to carve a pathway towards sports leadership is to find a friendly face on the local committee and work out where her skills can be used. It’s not necessary to have been a player, anyone bringing a defined skill set coupled with enthusiasm for their chosen sport would be welcomed, she says.

Women need to take that step, to push at the doors. It’s not always straightforward especially for mothers with the voluntary nature of sports meaning late nights and weekend commitments. But difficult is not the same as unimaginable.

Those doors won’t open by themselves, that’s for sure. One in four around the table is progress but it’s nowhere near enough to guarantee no slipping back.