Angling Notes: Return of diseased salmon to Irish rivers a cause for concern 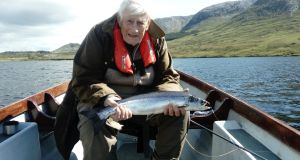 Regular visitor to Lough Inagh, Seamus Mallon from Armagh, landed this fresh salmon from the lake on a size 10 Connemara Black.

A SMALL number of salmon are returning to Irish rivers with signs of bleeding and skin ulceration, according to Inland Fisheries Ireland (IFI). This follows reports of salmon returning to Norway and Scotland with a red rash skin disease in recent months.

Salmon first began appearing in Irish rivers with these symptoms in early June and by mid-June, reports were received of fish with ulceration in at least six rivers on the east and west coast of Ireland.

Affected salmon show signs of bleeding, ulceration and haemorrhaging mainly along the area on the belly, head and tail. Secondary fungal infection normally sets in and may result in death of the salmon.

Until the cause of the disease is determined and the risk of spreading the disease established, affected salmon should not be removed from the water. Anglers who capture salmon with these symptoms are advised to follow biosecurity procedures and disinfect tackle, waders and equipment.

Inland Fisheries Ireland is working with the Fish Health Unit in the Marine Institute to sample live salmon in affected rivers to determine the cause of the disease.

Dr Paddy Gargan, senior research officer at IFI, said: “There is some evidence that the disease may become less frequent with rising water temperatures and the problem has been [more severe] in multi-sea-winter fish entering rivers early in the year in Norway and Sweden. There is also a suggestion that the disease is related to a change in salmon diet but this has not yet been established.

Anglers are asked to forward any reports and/or photographs to salmonhealth@fisheriesireland.ie or IFI’s 24-hour confidential number 1890 34 74 24 or 1890 FISH 24.

The facility, which manages a number of salmon and trout fisheries, was launched by the Minister for Inland Fisheries, Sean Canney TD.

“As a result of this project, more local and visiting anglers will be fishing in the area, which in turn will provide both recreational and economic benefits for the community,” the Minister said.

Funding of €216,000 was provided by IFI through its National Strategy for Angling Development with a further €30,000 forthcoming from the Creeslough club to enable completion of the project.

The facility at Lough na Tooey includes a new slipway, mooring pontoon, boatshed and car park. At Glen Lough, an improved 1.2km roadway leading to the angling site was constructed while at Owencarrow, 15 stiles and ladders and 33 stands were erected over 300 metres of river bank.

Dr Ciarán Byrne, IFI’s CEO, said: “We look forward to partnering with more clubs and associations on the delivery of fisheries projects and will announce those successful in securing funding from our latest funding call over the coming months.”

Paddy Boyle, Creeslough & District Angling Association, added: “This development is proof of what angling clubs can achieve in partnership with local development agencies and IFI. We asked for their help and got it because we presented them with a well thought out plan for the conservation and development of our fisheries.”

The €2.5 million lifeboat and launching rig represents a major investment and moves it from a 15-knot speed to 25 knots, cutting vital minutes off the time it takes to reach a casualty.

The Michael O’Brien is jet driven and the first in Ireland to use a Slars (Shannon Launch and Recovery System) to launch and recover a lifeboat. The Slars acts as a mobile slipway and has a unique turntable cradle, which can rotate the lifeboat 180º, ready to be launched again within 10 minutes.

Clogherhead coxswain, Tomás Whelahan, said: “We are honoured to receive this lifeboat and very grateful to our donor Henry Tomkins and to the local communities. We hope to bring many loved ones safely home in this new lifeboat.”