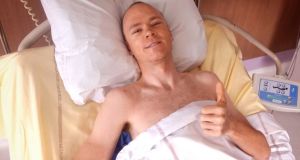 Screengrab taken from the Twitter feed of Chris Froome as he recovered from a crash at the University Hospital of St Etienne. Photograph: @chrisfroome/PA Wire

Chris Froome has left hospital to start his recovery from extensive injuries suffered in a crash during last week’s Criterium du Dauphine.

Froome’s bike hit a wall at almost 35 miles per hour during a reconnaissance ride for the fourth stage in France.

The Team Ineos racer had been treated at the University Hospital of St Etienne, where he underwent a six-hour operation to repair a fractured right femur, broken hip, fractured elbow and fractured ribs.

It was also reported Froome, 34, had fractured his neck.

The four-time Tour de France champion posted an update on Thursday afternoon as he prepared to begin the long road to recovery.

“As my time at ChuSaintEtienne has come to an end, I’d like to take the opportunity to thank the doctors & nurses for the exceptional care provided to me,” Froome said on Twitter.

“It’s been a rough week but I appreciate you having made it as comfortable as possible for me.

“This is just the first step to what will be a long recovery. Unfortunately I’m not yet able to go home, but at least I’ll have an opportunity to get a visit from my kids”.

Froome’s team-mate Geraint Thomas suffered an injury scare in a crash which forced him to withdraw from the Tour de Suisse earlier this week.

However, the 33-year-old Welshman remains optimistic about his chances of defending his Tour de France title when the action begins in Brussels on July 6th.