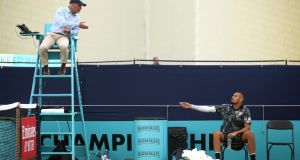 Nick Kyrgios complains to Irish umpire Fergus Murphy during his first round match against Roberto Carballes Baena of Spain during day four of the Fever-Tree Championships at Queens Club in London. Photograph: Alex Pantling/Getty Images

Nick Kyrgios accused officials of “rigging” his first-round match at the Fever-Tree Championships and admonished himself for “playing Fifa until 3am”.

The outspoken Australian, renowned for his on-court outbursts and meltdowns, launched an expletive-ridden rant at Irish umpire Fergus Murphy after missing a set point against Roberto Carballes Baena, claiming the Spaniard had double-faulted.

“Like, what are you actually doing up there? It was this far out. Bro, it’s taking the piss. I refuse to play.”

After Murphy issued a code violation for unsportsmanlike conduct, Kyrgios continued his tirade.

“It couldn’t have been further out. What are you doing? Jesus. Was that not out, the second serve? It’s a joke, man. It’s a serious joke,” he said.

“Like, your hat looks ridiculous, also. It’s not even sunny.”

After another point, Kyrgios added: “The ball was this far out on the second serve. I’m going. I’m not going to give 100 per cent when I’ve got linesmen rigging the game, I don’t want to play.

“You wonder why I don’t try half the time. Literally the set had finished, he double-faulted. Why am I playing at 5-5? Absolute joke.”

Having won the first set on a tie-break, Kyrgios was closing in on the match when he hit a poor lob to gift Carballes Baena a point.

“So lazy, do something, so lazy you are,” he muttered to himself. “You were playing Fifa until 3am, what do you expect?”

In the final game Kyrgios, 40-0 down, petulantly began returning from just outside the service line and somehow wrapped up the match 7-6 (4) 6-3.