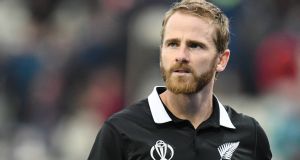 The World Cup’s first gripping finish ended with the result that may well have sewn up the top four with 20 group games still to come, as a Kane Williamson-inspired New Zealand overcame South Africa by four wickets to go top of the table.

The Black Caps captain was at his emotion-free and brilliant best in what proved a tense second innings run chase, stroking an unbeaten 106 from 138 deliveries from No 3 that took his side to their target of 242 with three balls to spare.

It has left the Proteas effectively – but not mathematically – out of the running after six games but Faf du Plessis’s side did not make it easy.

When New Zealand slipped to 137 for five – Chris Morris impressing with three wickets – they still required 105 runs from 100 balls, while Williamson, unbeaten on 63, needed a partner to continue Jimmy Neesham’s support in a watchful stand of 57.

Step forward Warwickshire favourite Colin de Grandhomme, who eschewed restraint and instead crashed 60 from 47 balls including a couple of meaty thwacks into the boisterous Hollies Stand.

Though the all-rounder holed out late on, his cameo, allied with Williamson’s steel, broke the back of the chase and now means fifth-placed Bangladesh must surely beat Australia today if a side from outside the current top four is to break into the semi-final spots.

South Africa, with one win, four defeats and one washout to show for their efforts, had their chances. Imran Tahir had twirled away for thrifty figures of 10 overs for 33 runs, the last of which could have had both De Grandhomme and Williamson dismissed.

A diving catch offered by the former on 22 proved beyond David Miller at mid-wicket – it would have been a screamer – but Tahir’s final ball should have secured the breakthrough the Proteas so badly craved.

Williamson tried to dab a fizzing leg-break fine, only to miss out. Tahir was convinced of a nick but Quinton de Kock, behind the stumps, and umpire Nigel Llong were oblivious to any contact. Had Du Plessis reviewed, Williamson would have departed for 76 with the faintest of edges detected.

The late tension, in which Williamson brought up his 12 ODI century with a six in the final over, was reward for a near sell-out crowd that had waited 90 minutes for the start due to a damp outfield. The 49-over-a-side format that resulted was a strange decision – why not 50 overs from 11.50am? – and prompted the stadium’s DJ to reach for OMC’s mid-90s single “How Bizarre”.

Equally puzzling was a pitch that was white in colour but slower and stickier than this shade suggested. South Africa struggled to truly cut loose at any stage until Rassie van der Dussen, top-scorer with 67 from 64 balls, ended the innings with a six and a four.

De Grandhomme was able to send down 10 overs of his medium pace for figures of one for 33 – Aiden Markram his victim for a 55-ball 38 - while Matt Henry, though sharper, was similarly stifling with none for 34 from his allocation.

But it was the pace of Lockie Ferguson that shone brightest and continued a fine World Cup, as he castled Du Plessis with a searing 92mph yorker for 23 and then saw both David Miller (36) and Andile Phehlukwayo (0) caught trying to force shots late on.

Trent Boult detonating De Kock’s leg-stump had made for an inauspicious start by South Africa but Hashim Amla’s 55 from 83 balls – one which made him the second fastest man after Virat Kohli to 8,000 ODI runs – steadied the ship.

Amla was troubled by the pace of Ferguson but eventually was undone by the delicate left-arm of Mitchell Santner, who got a ball to dip towards the opener’s feet, grip the surface and then ping the off-stump for a beautiful dismissal.

New Zealand were not perfect in the field. Two catches went down. But neither was costly and in the chase they overcame the early loss of Colin Munro – caught and bowled by Kagiso Rabada via an inside edge onto pad – as Williamson and Martin Guptill put on 60 runs in 12.4 overs for the second wicket.

Guptill, like all but De Grandhomme, was unable to truly free his arms but did pierce the in-field for five fours. His dismissal was more memorable than the innings itself, the right-hander swivelling 360 degrees when trying to pull Phehlukwayo, only to slip and kick the leg-stump with his back foot.

That fortuitous breakthrough was followed by two further strikes in quick succession. Morris looked slightly embarrassed when Ross Taylor flicked his second ball down leg to De Kock but there was little doubt about the follow-up, a ball that jagged off the surface and snicked the edge of Tom Latham’s bat for a more classical caught behind.

Morris returned in the 33rd over to have Neesham caught at slip on 23. But with the new man, De Grandhomme, in no mood to muck about and Williamson ice-cool, New Zealand found a way. - Guardian