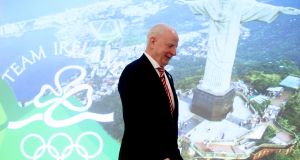 Pat Hickey’s trial has not yet taken place more than three years after his arrest in Rio.

The €410,000 loan paid to former Olympic Council of Ireland president Pat Hickey by the Association of National Olympic Committees (ANOC) in 2016 has been written off by the organisation.

The money was used to allow Hickey, a former ANOC vice president, to receive bail following his arrest by the Rio police at the Olympic Games in 2016. ANOC is the umbrella body representing 206 National Olympic Committees.

The payment was “unanimously approved” by ANOC president Sheikh Ahmad Al-Fahad Al-Sabah and all ANOC vice-presidents on medical and humanitarian grounds via a postal vote in November 2016.

Hickey had previously claimed that he could refund the money to the ANOC. However, at a meeting last year a question from the floor expressly queried the status of the loan.

“It came up at the AGM, or rather the annual get together of the ANOC. That question was asked from the floor and they are writing of those monies,” said president of the Olympic Federation of Ireland, Sarah Keane.

Keane also confirmed that although Ireland is a member of the ANOC, there would be no Irish money directly or indirectly used to pay towards the €410,000 write off. The entire amount has been absorbed by the Olympic movement.

“No, no,” said the OFI president when asked if Ireland contributed. “That money comes from the ANOC.”

The IOC Ethics Committee, which has been looking into the case for the past three years, declined to comment on the matter when contacted.

“We cannot provide any information as this is an ongoing procedure of the IOC Ethics Commission, whose work remains entirely confidential until a decision is taken. Best regards,” said the IOC press office in an email.

Prior to 2017, the OFI disclosed that the legal costs associated with Rio had exceeded €1 million, taking the legal costs of the controversy to the end of 2017 close to €1.5 million. The costs fell sharply in subsequent years.

Hickey’s trial has not yet taken place more than three years after the arrest. Hickey was charged with alleged ticket touting in Brazil, and was arrested at the start of the Rio Olympic games in August 2016. He returned to Ireland on bail pending the hearing of his case. He denies all accusations.

Hickey remains temporarily self-suspended as a member of the International Olympic Committee (IOC) and has vacated his position on the organisation’s Executive Board.