Sommer Lecky leaps to give Ireland another silver in Finland 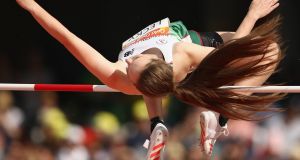 Here we go again - Sommer Lecky adding her name to the blossoming future stars of Irish athletics with another brilliant silver medal in the high jump at the World Under-20 Championships in sun-kissed Tampere, Finland on Sunday.

The 17 year-old from the Finn Valley club in Donegal possibly surpassed her own expectations and certainly her previous best. Lecky twice improved the Irish Under-20 record, clearing 1.87 metres and then a stunning 1.90m on her first attempt, which ultimately won her silver.

Only Karyna Taranda from Belarus went higher, who won gold via her clearance of 1.92m at the second attempt, also a national Under-20 record, after Lecky had missed her three attempts. Maria Murillo from Colombia also cleared a best of 1.90m, a South American Under-20 record, but on her second attempt, which gave Lecky sole possession of the silver, much to her obvious delight.

Lecky had come to Tampere with plenty of good credentials, beating the Rio Olympic silver medallist Mirela Demireva from Belgium in an indoor competition in February - but still few expected this. Her coach Niall Wilkinson also made the trip to Tampere to be close to the Castlederg athlete, Lecky’s silver medal a considerable boost to the Finn Valley club which has done great service to athletics in Donegal.

And after the women’s sprint relay team winning a brilliant silver medal on Saturday afternoon, it now doubles the number of medals Ireland have won in these championships in their 32-year history: Antoine Burke also won silver in the men’s high jump back in 1994, and Ciara Mageean also won silver over 1,500m in 2010 - these Under-20 championships not so much a stepping stone to the senior stage as an early taste of it.

Earlier the relay quartet of Molly Scott, Gina Akpe-Moses, Ciara Neville and Patience Jumbo-Gula collected their silver medals - also running an Irish junior record of 43.90 seconds on Saturday, losing only to the top-ranked Germans, who took gold in 43.82 having also come through as the fastest qualifiers.

Now Lecky’s silver brings to six the number of medals Irish athletes have won in the youth and junior championships over the past 10 days - adding to the four European Under-18 medals won last weekend in Hungary with Sarah Healy’s distance running double, Rhasadit Adeleke’s gold in the 200m, and Sophie O’Sullivan’s silver in the 800m.

Rarely, if ever, has the future of Irish athletics looked this bright.