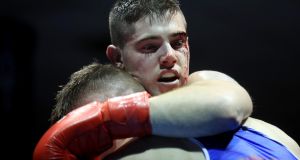 Joe Ward in action against Anthony Browne during the National Elite Championship Finals at the National Stadium in Dublin. Photograph: Donall Farmer/Inpho

Joe Ward promised to move “onwards and upwards” as he began his efforts to rebuild from the disappointment of the Rio Olympics by reclaiming the Irish light-heavyweight title at the National Elite Championship finals on Friday night.

The victory marked Ward’s first Irish title in three years as he had not competed in the domestic tournament since his 2014 success. “The nationals is always the hardest part because that’s the part where your journey starts,” said Ward after his win. “To go in here and get my national title back, it’s great. It’s onwards and upwards.”

Ward boxed aggressively from the opening bell, abandoning his usual back-foot style as he forced his opponent to the ropes in the first round. Browne attempted to combat his more experienced foe by switching between orthodox and southpaw, but the tactic did not appear to cause Ward much trouble to begin with – although the Dubliner had more success in a competitive second round.

Ward picked up a cut – seemingly from a head clash – over his left eye in the final stanza, with Browne becoming more aggressive. By this stage, Ward was visibly tiring but the reigning European champion remained composed and managed to see out the win.

Glasnevin’s Harrington also claimed a 4-1 split win after seeing off a game O’Keeffe at 60kg, which is one of three female Olympic weights.

“I’ve been chasing that 60kg title and wasn’t confident to go for it for years,” said Harrington. “I thought this year was my year. Katie’s not here so why not go in and give it a bash?”

In the battle of the champions at 56kg, Belfast’s Kurt Walker defended his crown against reigning light-flyweight title holder Stephen McKenna of Old School, Monaghan, who jumped two weight classes for this year’s tournament. The defending champion’s greater accuracy in the third and final round helped him retain his title on a unanimous decision.

A new light-flyweight champion was crowned as Derry’s Blains Dobbins claimed a split-decision victory over Darryl Moran of Donegal.

In the opening bout of the night, Kristina O’Hara of St John Bosco defeated Mayo’s Shannon Sweeney to claim the women’s light-flyweight (48kg) title, while Christine Desmond (Fr Horgans) retained her 75kg belt on a walkover at one of three women’s Olympic weights.