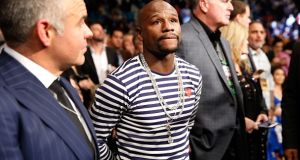 Floyd Mayweather Jr. holds all the aces ahead of any potential fight with Conor McGregor. Photograph: Steve MArcus/Getty

Who knows if the two biggest names in MMA and boxing will actually step into a ring? They talk and talk about money and talk and talk about a deal but they never sign a contract. This is how Mayweather works, stretching the conversation, turning up the rhetoric and adding zeros to the guaranteed purses for a fight that he might not even want. It took more than five years of negotiations before he fought Manny Pacquiao. Why would he rush to meet a fighter he clearly does not see as an equal?

For now Mayweather blathers on, keeping his name alive in the days before his 40th birthday. He drops hints, as he did with ESPN’s Stephen A Smith the other night, saying a McGregor agreement was “very, very close”. Then as suddenly as he creates news he pulls it back with announcements like Tuesday’s Instagram post in which he said there was no deal at all.

Leverage is everything in the fight game. Both Mayweather and McGregor use it well in their worlds, manipulating promoters, network executives and other fighters to get what they want. They are accustomed to being begged for bouts and they revel in the public groveling from prospective opponents needing their names for a lucrative payout.

But in a potential Mayweather-McGregor super fight, it is Mayweather who wields control. Despite being the biggest draw in the UFC, McGregor does not have the selling power of Mayweather. He may have raised the pay level for the UFC’s best fighters but the money he makes is a fraction of what Mayweather can command.

Which puts McGregor in an interesting place. He is the boss inside the UFC, constantly tweaking the organisation’s president Dana White while stringing along the biggest names in three weight classes. In a promotional battle with Mayweather, however, he is the one left to beg: shouting empty call outs and telling GQ Style that if he gets to hit Mayweather “his head is going to go in the bleachers.”

The operative word is “if”. McGregor can handpick his opponents for the four remaining fights on his UFC contract right now, anointing those four men as instant millionaires. And yet he is powerless to move Mayweather. For Mayweather to step from his wealthy retirement, the money has to be right. So far, much like the hopeless contenders who chase McGregor’s shadow in the UFC, McGregor isn’t delivering the kind of money that will move Mayweather.

No matter how much McGregor preens this week in Las Vegas or posts tweets of himself on a throne, he’s not getting a fight with Mayweather unless Mayweather believes the fight will make him very, very rich. Even if they can make a deal, Mayweather will dictate the terms. He will demand at least 60 per cent of the payout. He will choose the location and even the venue through which the bout will be distributed. The power will be his.

It’s clear Mayweather is intrigued by a McGregor fight. Even after Tuesday’s denial of a deal he taunted McGregor in an Instagram post on Wednesday telling McGregor “to take care of your business with the UFC and then have your people call my people”. A fight with McGregor should be easy work for Mayweather, even at his age. While McGregor is an exceptional boxer in the UFC with fast hands and a heavy punch, he lacks Mayweather’s skill. A boxing ring is not an MMA cage.

Time is not on McGregor’s side. He is trapped in a contract with the UFC that promises to pay him well but nothing like what he’d get from a Mayweather fight. His star has never been higher after winning a rematch against Nate Diaz last summer and beating Eddie Alvarez at UFC 205 in November. Currently he is on a babymoon that will keep him out until May. He has a window, however small, to chase the big money. But it is a perilous one.

If McGregor takes another UFC fight before cutting a Mayweather deal and then gets knocked out, he probably will lose any hope of a Mayweather bout and the payout of a lifetime. But it might be impossible for him to break away from the UFC. White may have offered $25m to both McGregor and Mayweather to hold the fight on his own terms, but he does not seem enthused to have the bout happen. Should McGregor get trampled by Mayweather, White’s biggest name could be diminished, robbing the UFC of their top draw.

Mayweather can wait. So far there has been little incentive for him to leave retirement. McGregor needs him far more than he needs McGregor. He can stoke the embers of a McGregor fight just in case the money for such a bout comes through. If it doesn’t he can smile into the sunset, leaving McGregor like so many of those orbiting McGregor in the UFC – frantic to grab the payday that comes with his name.

1 Trump in the rough over playing golf and US Covid-19 fatalities
2 Awarding of 2023 Rugby World Cup to France part of Laporte investigation
3 Suarez’ Italian language exam rigged according to prosecutors
4 Two in custody in Tour de France doping investigation
5 What next for green jersey hero Sam Bennett after toughest of Tours?
Real news has value SUBSCRIBE