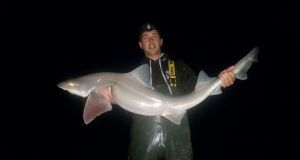 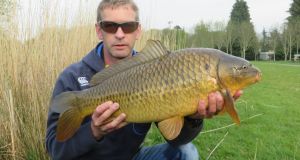 Des Chew with specimen carp of 5.9kg from Blanchardstown Lake 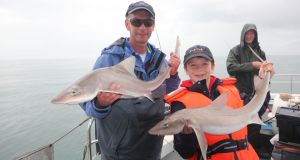 Founded in 1955, the ISFC is an independent voluntary body, representing angling interests in Ireland which verifies and records the capture of large (specimen) rod-caught fish by anglers. To date, over 29,000 claims have been received.

In his chairman’s remarks, Dr Robert Rosell said that, despite the fact conditions were not always conducive to angling, over 500 claims were submitted across 42 species. Highlights included a new record smooth hound and a rare scad specimen.

Spare a thought for Peter Pollman from Austria. While fishing in Red Bay in Northern Ireland, he caught a scad of 0.91kg (2lb) on feathers which pipped the 30-year-old record by 0.0006kg. Unfortunately, the weighing scales specifications were inadequate to weigh as a new record.

Almost a third of the 486 ratified claims were for spurdog (74) and smooth hound (85). Consequently, the weight threshold for smooth hound has been increased to 3.5kg and a watching brief maintained for spurdog.

In contrast, the restoration of common skate to the list in 2016 as a length-based specimen, saw 12 claims ratified. A rare white skate capture was also notified to the ISFC.

Carp featured strongly with 49 recorded, 47 of which were caught in The Lough, Cork. David Flynn came out tops with a beauty of 12.36kg (27.2lb) on boilie.

The issue of declining funds has reluctantly forced the committee to begin charging for claims requiring genetic verification, ie shads, cyprinids and their hybrids, as and from 2018.

The National Coarse Fishing Federation of Ireland (NCFFI) is pleased to announce the line-up for the FIPS-ed Feeder World Championships to be held in Portugal in June.

Team manager Brenton Sweeney said: “I am very pleased to present a refreshed world championship team this year, and welcome three new members to the squad. In the last three years Ireland has achieved a team silver medal and four section wins and is currently ranked 12th in the world.

“It has always been my ambition to introduce younger members and it’s great to welcome Johnny McKinley and Rimantas Kondrackas along with Nick Howell who bring extensive knowledge of international championships.

“Former team member Philip Jackson and Paul Heaney of Lurgan CAC will provide support to the team in Portugal and I’m delighted to appoint Philip as my assistant as we coach these anglers at home and away.

“I would like to thank NCFFI and our sponsors for their valuable support as we look to the year ahead,” Sweeney said.

After the longest absence on record, the first salmon of the year from the river Drowes was landed last Monday. The 3.6kg (8lb) sea-liced fish was caught from the Mill Pool on worm by William Rainey from Bangor, Co Down.

“Water levels have been very low, currently just 0.488 metres on the gauge which is summer levels,” Shane Gallagher said.

Due to a late cancellation of a reserved lodge, Delphi Club in the Bahamas has an unexpected opening for six nights from Sunday, April 30th to Saturday, May 6th. This slot has always been taken by one of our club members and his friends, but for serious medical reasons he has had to pull out.

Anybody interested in taking a room or rooms in this period should contact Peter Mantle. Rates can be found here delphi-bahamas.com.