Students with valuable qualifications are choosing to go to America 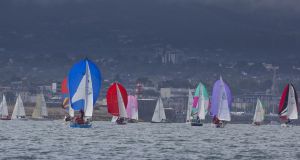 Evidence of changing times, were it even needed is not in short supply when it comes to Irish Sailing. Even world events find a way of trickling into this corner of life with knock-on effects to plan.

While 2015 saw a crisis in supply for senior instructors, an Irish Sailing Association requirement for courses of more than six students, additional training of new candidates, was hoped to have addressed this problem for the coming season.

However, already there is some evidence that club organisers may struggle to fill key places in their instructor panels, this time due to the political situation in the United States.

With a stated intention to discontinue the popular J-1 visa programme that has become a rite of passage for many third-level students during the summer months, there are concerns students with valuable instructor qualifications are choosing to get the American experience before the visa scheme is brought to an end.

Although the US State Department this week announced an additional 2,600 J-1 visa for Ireland this year, apparently running against expectations that the scheme would change in the short-term, the increased availability may only increase pressure on Irish clubs to secure experienced instructors.

While there is no suggestion of an overall shortage of instructors, older students with experience are most sought after both at home and abroad, mostly in the US but also in the UK and Europe as well.

“If its a choice between Dublin Bay and Rhode Island, it’s not hard to see that as a difficult choice,” said one club organiser. Rates of pay and conditions in the US can also be significantly better.

So far there has been no indication of a crisis reaching the ISA, according to regional development officers. Cluster meetings between the clubs and the national authority are schedule for the end of this month when the full extent of recruitment and impact of visa changes will be clearer.

Now in its 15th season, a record 92 boats at the height of the pre-recession era turned out but a healthy 70-plus boats can nowadays be expected to turn out for the pre-Christmas “Turkey Shoot” event with about two-thirds continuing into the coldest months of the new year and the “Spring Chicken” round.

“We don’t want totally competitive racing – it is winter sailing after all,” said Fintan Cairns, the original founder of the series that began when the Dún Laoghaire Marina first opened. “We go out on a Sunday morning and 99 per cent of the time people know they’ll be in by 12.30pm so they can continue with their weekend plans without too much disruption.

“Occasionally we get fellas coming up to us thinking its a world championship but we ask them to calm down – we awarded one guy a bottle of Calpol one day.”

The success of the learner and adult sailing schemes in the local clubs has also had an impact with places for newcomers on individual boats encouraged for the winter event.