It earned a seventh place finish for Ireland, one rank above their pre-tournament rating 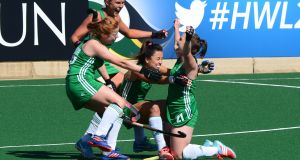 Katie Mullan and Lizzie Colvin both struck either side of the 48th minute to see Ireland land what could be a crucial 2-1 win over India in the World Cup qualification shake-up.

The turning point, though, came when number one goalkeeper Ayeisha McFerran was sent for a 10 minute suspension. Her understudy Grace O’Flanagan’s first act was to save Rani Rampal’s penalty stroke to prevent India going 2-0 up.

“It was some way to come onto the pitch and not how I expected,” O’Flanagan said afterwards. “The girls put in a superb effort throughout the match. I think we dominated throughout and I think we deserved it.”

It earned a seventh place finish for Ireland, one rank above their pre-tournament rating, and crucially puts Graham Shaw’s on the waiting list for a potential ticket to London 2018.

“The performance from the first minute to the last was superb,” Shaw said. “The dominance didn’t show in the first half but this team showed incredible character to go down to ten men and create so many chances. We showed that resilience to keep fighting and eventually getting too great goals.”

His side were feverish in the opening 10 minutes with a high, aggressive press working well. Roisin Upton saw a drag-flick taken off the line by Monika from the pick of the chances.

But the tie quickly turned sour when India awoke from their sleepy start to win a corner against the run of play which Gurjit Kaur planted into the bottom right corner.

And it could have been even worse when McFerran misjudged a long overhead, getting to the ball second with Navjot Kaur nicking in. The Irish goalkeeper was sin-binned for 10 minutes with a penalty stroke awarded for good measure.

O’Flanagan came off the bench, though, to heroically save from the spot with her first touch of the tournament, smothering Rani Rampal’s flick. India had a second ruled out on video review after Anupa Barla’s cross was touched in but, when it went upstairs, a faint back-stick from Rampal was shown.

It left them with a lifeline and once back to the full complement, Ireland returned to bossing the tie. O’Flanagan was retained in goal once McFerran’s suspension was complete and saved a couple of corners India won on the counter.

The Asian side were content to try and wind time down but soon started to ship cards with players sent to the sideline for time-wasting. A plethora of chances just beyond their mark but the pressure finally told with Lena Tice firing a ball to the right post where captain Mullan guided home.

Having to make the play, India offered little in the closing stages and Ireland saw out the tie in control, the final whistle leading to players mobbing Grace O’Flanagan en masse.

In terms of the World Cup, they must now await the outcome of the continental championships over the next few months but odds are in their favour that Ireland will make the final cut.

“It’s huge. This team deserve it. There is no better group of girls. They work incredibly hard on a small budget; they are part-time, working full-time and so deserve everything they get.”