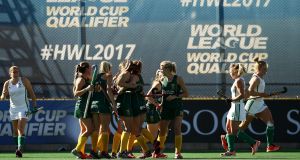 The Irish women’s second chance at direct qualification for the 2018 World Cup came a cropper as they produced a sub-par performance to fall to a heavy 3-0 defeat to South Africa in their fifth to eighth place play-off on Thursday.

It means a direct ticket is now out of Ireland’s hands this week with their fate dependent partially on Saturday’s seventh place classification match and then on the autumn’s continental championships.

Graham Shaw’s side never found the rhythm from early in the tournament that saw them put it up to much higher ranked opposition.

This time, South Africa - rated 13th to Ireland’s 15 - showed their intent with two testers for Ayeisha McFerran in the first few minutes. While the Johannesburg hosts were also nervy and error-strewn, they had much of the first half impetus and went ahead from a penalty corner which Lisa-Marie Deetlefs cracked home on her backhand.

Crucially, Ireland missed a penalty stroke a few minutes later, a psychological blow just before half-time. Roisin Upton’s drag-flick from a corner hit Nicolene Terblanche’s face-mask on the goal-line, leading to the stroke but the Limerick woman saw her effort bounce off the base of the post.

Much greater intent came in the second half. Anna O’Flanagan’s near post touch to Katie Mullan’s cross was brilliantly tipped around the post by Phumela Mbande’s out-stretched stick.

Gillian Pinder’s driving runs kept pushing the side on but, with Chloe Watkins in the sin-bin, South Africa punished on the counter-attack with 11 minutes to go. Hannah Matthews was robbed in the circle by Bernadette Coston who had two bites before eventually striking home for 2-0.

Lilian de Plessis made extra sure with a little lift over kicking back Shirley McCay - in place of goalkeeper Ayeisha McFerran - and the game was done.

The onus falls back on the Irish men to make something out of this lengthy tournament on Friday. They meet France at 1.30pm (Irish time) in their fifth to eighth place tie - it is not a direct qualifier for the World Cup but if Ireland win the tie and it would only take a bizarre series of results at the continental championships to deny them.

John McKee will miss the rest of their tournament with a broken collar bone that required a couple of metal plates to be inserted and will see him out of action for a minimum of six weeks.

The French are lower ranked but their draw in the final of World League Round 2 is evidence it will be far from a gimme.

Prendergast praises Hughes as Armagh rider crowned British champion jumps jockey 16:28
JP McManus Pro-Am postponed for 12 months 15:55
Five YouTube channels to get your fix of sporting nostalgia 14:58
La Liga could lose €1bn in revenue if season does not restart 14:09
US prosecutors say Russia and Qatar bribed Fifa officials in World Cup bids 13:07
Here is your handy guide to sport on television this week