James McGee through to second round of Wimbledon qualifying 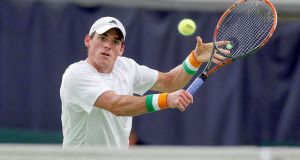 James McGee of Ireland: will next face 19-year-old Andrey Rublev, who is ranked 92 in the world. Photograph: Donall Farmer/Inpho

Ireland’s James McGee earned a place in the second round of the Wimbledon qualifying event at Roehampton with a 6-7 (6), 6-3, 6-4 win over Spanish veteran Rubin Hidalgo.

The 30-year-old Dubliner beat the 39-year-old who is ranked 172 in the world in two hours 33 minutes to advance. McGee must win two more matches to qualify for the main draw of the Wimbledon singles event which begins next Monday.

McGee lost the first set narrowly in a tie-break. But in early exchanges of the second set he pulled ahead to lead 3-1 with Hidalgo converting a break point and immediately taking his service break back.

But McGee returned the favour and intent on taking the match to three sets went on to take a 4-2 lead and the momentum to take the second set 6-3.

The third proved to be another where the two players handed over service games only to retrieve them, Hidalgo taking a 4-2 lead and Mc Gee gamely coming back into it and serving for 4-4 in a tightly balanced match.

The 201 ranked McGee finally earned another break and served out for the match to earn a place in the second round of the competition against the Russian fifth seed, 19-year-old Andrey Rublev ranked 92 in the world.