John McEnroe will not apologise over Serena Williams remarks

‘I didn’t know it would create controversy. I’ve said this 1,000 times’

Serena Williams has asked John McEnroe for 'respect' on Twitter after the seven-times grand slam champion said his fellow American would be ranked, 'like 700 in the world,' if she had to play on the men's circuit. Video: NPR News 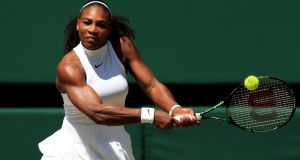 John McEnroe has refused to apologise for his comments about Serena Williams and believes men should play against women to settle the argument.

The former world number one stirred up a storm after telling American radio station NPR that Williams, who holds the Open era record of 23 Grand Slam singles titles, would be ranked around 700 in the men’s game.

McEnroe has been widely criticised for appearing to belittle the achievements of Williams, but defended his remarks.

After describing Williams on NPR as the greatest female player of all time, McEnroe was asked why he had not simply said greatest player.

He told CBS: “I felt the need, however unfortunately, to defend myself and say what I really felt, which is about what I think she would be.

“I’ve got a solution. Solve the problem, and I’m sure the men would be all for this – the men and women play together. And then we don’t have to guess.”

Williams responded to McEnroe’s comments with a pithy response on Twitter.

The 35-year-old, who is away from the tour preparing to give birth to her first child, wrote: “Dear John, I adore and respect you but please please keep me out of your statements that are not factually based.

“I’ve never played anyone ranked “there” nor do I have time. Respect me and my privacy as I’m trying to have a baby. Good day sir.”

Asked if he would like to apologise, McEnroe said: “No,” adding: “I didn’t know it would create controversy. I’ve said this 1,000 times.

“I don’t want anything to go wrong with Serena because she’s pregnant, I don’t want to upset her.

Williams accidentally made her pregnancy public in April having been off the tour since winning the Australian Open in January.

The seven-time Wimbledon champion revealed her shock at the discovery on the eve of the tournament in an interview with Vanity Fair.

Williams, who posed naked for the magazine while heavily pregnant, described her reaction: “Oh my God, this can’t be – I’ve got to play a tournament.

“How am I going to play the Australian Open? I had planned on winning Wimbledon this year.”

Williams has already made it clear she is determined to return to the tour next year, with Margaret Court’s all-time record of 24 slam singles titles an obvious carrot.

Having a baby during her playing career was clearly not in Williams’s plans.

“This is kind of how I am right now. This is happening sooner than later, and it’s going by so fast.”