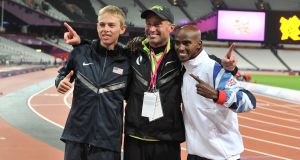 Mo Farah has insisted that he will stick with his controversial coach Alberto Salazar when he moves up to the marathon next year, despite reports suggesting he will sever ties with the American’s Nike Oregon Project after this summer’s world championships in London.

However, Farah has admitted that his desire to relocate back to Britain is growing, and the Guardian understands that the double 5,000m and 10,000m Olympic champion has been looking at houses in Surrey. Given Salazar writes Farah’s training programmes but rarely administers them directly, moving back to the UK would not necessarily mean he would switch coaches.

And speaking before Wednesday’s Golden Spike meeting in Ostrava, where he will race over 10,000m, Farah insisted he had no current plans to change his coaching set-up. “It is the first time I am hearing this but nothing is changing in terms of my coach and what I do,” he said. “I have been doing the same stuff since 2010 and I am not even looking that far ahead. This year is about taking care of business doing the world champs and after that I will think about it. But I do miss home. We will see.”

When the question of whether he would be working with Salazar after the world championships was put to him directly, he replied: “Yeah. Nothing has changed.” However, he did admit: “At some point I will be back. It’s just a matter of time of when I will be back. I have four kids, got to think about them, they are in school, there are a lot of things I can’t change overnight. But I am excited to be home at some point.”

Later he admitted that training for half the year at altitude in Ethiopia, France and the US was also taking its toil. “I do miss my family, it really hurts me, because I am away six months a year,” he added.

But Farah said the ongoing investigation by the United States Anti-Doping Agency into Salazar and some of his athletes would not affect his decision.

“It is old news,” he replied. “Nothing is new. I said it clear from day one, if anything does come out, I’m out. It has been going since 2015 it is boring now.”

Farah is hoping to run close to his personal best in Ostrava, in what he says will be his penultimate 10,000m race on the track before bowing out at the World Championships. “Everything must come to an end and I’d like to end on a high,” he said. “If London goes as well as I like, you won’t see me on the track. You might see me doing some crazy events though.”

The 34-year-old has looked in strong form this year, particularly when beating most of his rivals over 5,000m in Prefontaine in late May, but admitted he was finding it harder to maintain his levels as he gets older. “Every year it gets harder and harder, and no one is going to give it to you on a plate in London,” he said. “Particularly I have found this year harder and more challenging to doing 120 miles a week. My body hasn’t responded as well as it did in 2013. It is not easy.”