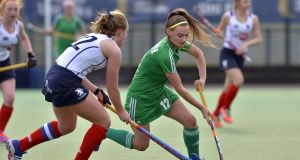 Jessica McMaster of Ireland: scored one of the goals that provided Ireland with a draw against Britain. Photograph: Rowland White/Presseye/Inpho

The Irish underage international sides endured another inauspicious day with just two draws gleaned from the six games played across the continent.

The Under-23 women did add to their Tuesday win over Canada with a 2-2 draw against Britain with Sarah Torrans and Jessica McMaster netting the goals.

There was an element of frustration, though, as the British team nicked a last minute equaliser from a controversially awarded penalty corner. It means they will probably need a positive result on Belgium – whom they beat twice in warm-up games – to have a chance at playing off for third place from this Six Nations event in Antwerp.

The men’s Under-23s lost 6-1 to Britain, their third blank from three, with hosts Belgium on Friday their last pool game.

At Under-18 level, the girls needed a draw or better to reach the semi-finals but succumbed 4-0 to England. It means they go into the relegation pool but a win over the currently pointless French will ensure safety.

The boys lost 7-0 to Belgium in a dead rubber. They were already confined to their relegation pool and will probably need wins over both Spain and Poland to stay up.

At Under-16 level, the boys continue to be the most impressive of Ireland’s squads this week. Troy Chambers netted twice against Spain in a 2-2 draw, adding to their win over England.

The girls missed out 2-1 to the Spanish and will hope they can get off the mark when they play Belgium today at 4pm in the Mardyke. They are the only Irish side in action with the other five teams resting.