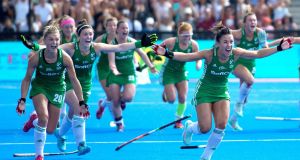 Gillian Pinder propelled Irish team sport into a whole new dimension - a first ever World Cup final of any description for a team field sport - as their sublime shoot-out team prevailed against Spain at the Olympic Stadium in London.

The Dubliner was not even part of the five to take a penalty on Thursday in the quarter-final win over India, but she stepped in to the breach, scoring the first and last penalty of the decisive shoot-out with Ayeisha McFerran yet again producing a remarkable series of saves.

The tie provided yet another drama-laden end, a real tussle between two supremely well-matched sides who have met each other 26 times in five years.

O’Flanagan gave the Green Army the perfect start with another perfectly worked penalty corner move in the third minute. It has been a fruitful area this tournament, netting two goals from eight corners in the competition prior to this tie.

Again, Graham Shaw’s research was critical, identifying the pocket of space for Shirley McCay to crack the ball into where O’Flanagan was sliding to touch the ball through Maria Ruiz.

It was her 65th international goal, one which by Hockey Ireland records, draws her level with Lynsey McVicker as the all-time top scorer.

It came amid an up tempo start, Ireland bossing the first 10 minutes, one which had more chances and excitement than the entire quarter-final of normal time against India.

Ruiz saved well from Ali Meeke’s piledriver before Spain found their form with the immaculate skills of Gigi Oliva the impetus. Carola Salvatella twice clipped efforts just wide as Ireland were forced to do plenty of defending deep in their 23-metre zone.

Calls from the assistant coaching box were to “step out” and they eventually heeded the advice, gaining control again. Deirdre Duke went close to a second when her shot clipped the outside of the post and a third penalty corner in the last minute of the half from Hannah Matthews was tipped away by Ruiz.

A fourth corner came and went in the early seconds after the big break but Spain really turned the screw for the rest of the quarter. Stepping high, they were forcing mistake in high positions long before Alicia Magaz got them on the board. Salvatella effected the turnover, feeding Oliva and on to Bea Perez. Her cross was perfect and was met first time by Magaz in the centre.

Spain continued to work their press with great purpose, allowing the ball out to left back and then swarmed in numbers. It meant a huge, terrier-like defensive effort was needed and produced with Zoe Wilson - who will now become World Cup hockey’s third ever player to wear glasses in a final - excellent and Lizzie Colvin tearing about.

Ireland finished better with Mullan a warrior in attack. She had one baseline diving shot blocked by Ruiz before forcing a fifth penalty corner with second minutes left. Wilson’s shot spun off the first runner, almost twisting its way beyond Ruiz but Spain got back to clear off the line, a heartstopper.

In the shoot-out, Ireland took the early advantage via Gillian Pinder’s goal and two Ayeisha McFerran saves but they could not build on that and Spain got back on terms via Oliva’s smash.

It sent it to the final round of the regulation five where Watkins repeated her trick, ghosting left and slotting under the goalkeeper. Lola Riera, though, showed serious nerve to lob McFerran and send it to sudden death.

But it just delayed the victory by a few seconds, Pinder going up again to slot home after another McFerran block and earn a first for Irish sport.

Coach Shaw hailed the former St Andrew’s student as the most relaxed player in his panel and she seemed more than content to step up to the plate when asked.

“We had seven people ready to take one. I wasn’t called on the other but I am really glad I stepped up today. I don’t have a plan when I step up - one of the few who doesn’t - just go in, move her a bit and the chance opened up.”

Pinder hailed the amazing work of McFerran once again who has pretty much cemented her goalkeeper of the tournament status.

“We’re so confident going to one-v-ones because she is such a talented goalkeeper and we know if we score two or three, it would be enough to send us through.”

Ireland will play the Netherlands in Sunday's final (4.30pm) after they beat Australia 3-1 on penalties following a 1-1 draw.