Thomas Barr: I look back on Rio and think ‘did I actually do that?’ 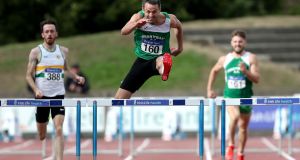 Thomas Barr on his way to victory in the 400m hurdles during the National Senior Championships at Morton Stadium, Santry, Dublin. Photograph: Bryan Keane/Inpho

Show me the medals. Nothing has or ever will count for more when it comes to championship running, and no one is more aware of that right now than Thomas Barr.

Here’s the scene: we’re somewhere under the not entirely packed Olympic Stadium in Rio, early August, hot afternoon, two years ago already, and Barr has just finished fourth in an absolute flat out final of the 400 metres hurdles. And he’s positively beaming.

“When I saw the time I was ecstatic, because 47 seconds is ridiculous territory,” he says, complete with that bright, chirpy smile that rarely leaves his face, even when he needs it to.

“Maybe I just didn’t execute the perfect race, but I left everything on the track, and I’m thrilled with that.”

Of course there are no medals for fourth – only a quick high-five from the winner, a slap on the back from second and third, and a teasing sense of torment that often lasts at least another four years. Only for Barr that day in Rio also came with the sense his medal chance would come again, sooner if not later.

He was just 24, had twice broken the Irish record, his 47.97 seconds in the final within licking of Olympic bronze: just .05 of a second, to be exact: 47.97 would have won him bronze in London 2012, and silver at each of the previous two Olympics before that. With the 2017 World Championships in London already looming nigh maybe Barr only needed to bide his time.

Guess what; these things rarely work out that way. Barr made it to London last summer, only to be struck down by the rampant gastroenteritis, forcing him to withdraw from his semi-final. Two of the medal winners from Rio, the American Kerron Clement and Turkey’s Yasmani Copello, were trumped by the 21-year-old Norwegian Karsten Warholm, who won the gold medal in 48.35.

Into 2018, and guess again: the event has moved on even further. Abderrahman Samba from Qatar, still only 22, began the season with a series of red-hot times, and in Paris in July ran 46.98 – bettered only by the world record of 46.78, set by the American Kevin Young in the 1992 Olympic final.

Warholm also came out in the London Diamond League last month and improved his Norwegian record to 47.65. Such is his confidence that Warholm is now targeting an unprecedented 400m-400m hurdles double at next week’s European Championships in Berlin. Show him the medals.

Now here’s the deal. Barr started his season struggling to break 50 seconds, before running 49.10 to win in Lucerne at the start of July, having run 49.40 in Slovakia in June.

“We’re back baby,” as Barr sweetly put it himself, and he followed that with a 48.99 in London, finishing third behind Warholm and Copello. Before any talk of a medal in Berlin, that’s certainly good enough for now.

“Lucerne was definitely a turning point,” Barr tells me, looking at his fittest, leanest, and certainly medal hungriest since Rio.

“For myself, yes, but also Hayley and Drew Harrison [his coaches], to let them know we’re in the right place, and everything is paying off.

“The 400m hurdles for me has always been such a rhythmical event, and it was just trying to find that rhythm. I was stuck around the 50-point, then in Lucerne everything just clicked.”

Barr doesn’t do stress, even when maybe he needs to. His run-up to Rio was properly “haphazard”, and everything fell near perfectly; to medal in Berlin things may need to be bang-on perfect.

“I wasn’t worried, no, because I knew we still had time. And I knew it could be just a matter of a day or two, and that’s all it did take, actually. At training, it just didn’t feel like I was myself. And in races, I was fast over the first 200m, but it was taking too much out of me, I was tired over the last 200, and didn’t have that trademark strong finish. And I really felt like I was out of my depth when I didn’t have that.

“We had a look a few things, just decided to relax, run a bit taller. My hips were a bit low, and that was literally all it was. Physically, I’ve had no injuries, it’s been one of my most consistent years of training. I know last season was a wipe-out, and Rio was my last really good race. But we know we’re coming into 47-second territory again. Warholm we know is consistently into 47, but I’m right there where I want to be.”

Ireland has only won 14 medals in the previous 23 editions of the European Championships (first staged in Turin in 1934, held every four years up until 2010, and being biennial since): five of those belong to Sonia O’Sullivan, another two to Derval O’Rourke, but two more have come in the last two editions – Mark English winning 800m bronze in 2014, and Ciara Mageean 1,500m bronze in 2016.

What has further stirred Barr’s appetite for a medal in Berlin is the realisation of what exactly they count for, given the reaction to the underage medals won by Irish athletes last month at both the European U-18 and World U-20 championship. And with that maybe the realisation these highs don’t come round again very often, if at all.

“A medal for Ireland is always going to be a surprise, to a certain extent. And I think bringing that talent through is still the hard part, given the drop off, particularly with girls. I know myself when I first moved to college in Limerick I was contemplating giving it up, was losing interest. I wasn’t really excelling, stuck around 56 seconds, but that turned out to be my breakthrough year.

“It was my parents really who told me to give it one more year. My dad especially believed I had the potential, and the technical coaching brought me from 56 seconds down to 50 seconds by the end of the season. I gave it the year, and it paid off, and that’s the point where athletes need support.

“I could well have fallen through the cracks. Very, very easily. I was actually very close to it. And the hard work has to kick in at some stage as well. That’s my advice, really, that these young athletes do need to keep the foot on the gas. I don’t mean suddenly busting a gut, but keep gunning for more, stay hungry.

“I know this sport, any sport, there’ll always be more downs than ups. Rio was such a massive high, and that’s why we stay in the sport, for those one-off performances that happen every year, or two years, or three years. There are days I look back on Rio and think ‘did I actually do that?’, because it was all so mad. But I also know I can go out and replicate it again.”

Adama Traoré is everything City hate - can they stop him this time? 11:00
All in the Game: It’s James not Bolt for Carlo Ancelotti 10:00
Liverpool’s win at Stamford Bridge felt like a Sadio Mané highlights reel 09:21
The Offload: Saracens prove Pro14 is not fit for purpose 09:00
Bryson DeChambeau’s ‘mad scientist’ muscle validated by US Open triumph 08:21
Here is your handy guide to sport on television this week