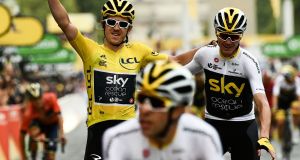 Never, surely, has a flute of champagne tasted so sweet as the one Geraint Thomas enjoyed on the road into Paris. For it confirmed that winning the yellow jersey, which had appeared such a vacuous dream, was now a lucid reality. Before standing on the podium the 32-year-old Welshman promised a party that would go on for “two weeks or perhaps even a month”. The glint in his eye suggested he wasn’t joking.

This was a meticulously planned Tour de France victory but also a slightly accidental one. Even after the Welshman motored away from Chris Froome up the Alpe d’Huez to win stage 12 he was honest about his place in the Team Sky pecking order, calling himself “maybe a bit more than a pawn”.

Ten days later he rode along the Champs Elysees like a conquering king before easing back as Alexander Kristoff took a vigorously contested sprint finish.

For years Thomas was known mostly as a phenomenal track rider. Then, slowly, he made the transition to classics contender and loyal domestique to Froome. But few expected him to develop into a mountain goat capable of winning two stages in the Alps. No wonder he was a 14-1 underdog with the bookies three weeks ago.

Thomas had prepared for his first grand tour by getting his weight down to 67.6kg – 10st 9lb – the lightest in his career, no mean feat at 6ft 1in tall. He also had three hard training camps in Mallorca and had practised Saturday’s time trial course in advance in the expectation that it might be crucial.

Luck also played its part. Froome and Tom Dumoulin, who were riding on heavy legs after the Giro D’Italia, lost time after early crashes. Richie Porte, another contender, had to abandon after breaking his shoulder.

Yet there was a crucial change in mindset from Team Sky, too. In the past Thomas would have been forced to drop back to help Froome when the four-time Tour winner crashed on the first stage, losing 51 seconds. Not this time. “I was allowed my freedom,” the Welshman explained. “It wasn’t like I had to work for him as a domestique. Obviously the guys were riding for Froomey, while I was the back-up leader. But it was clear that I wouldn’t have to sit up if I was feeling good and Froomey bad. Then as the race went on it worked itself out anyway.”

And how. Team Sky’s plan had been to see how the Alps stages went and let the road decide. Yet even when Thomas led by 1min 39sec with a week remaining, they kept faith with Froome – mindful of the Welshman’s reputation for crashing and having mad days. Instead it was Froome who cracked in the Pyrenees, whispering to his team that he was “not feeling super” on the Col du Portet and prompting a rapid changing of the guard.

Not everyone, however, saw it that way. L’Equipe on Sunday had a front page picture of Thomas and Froome embracing with the stark headline Le Regne Sans Fin, or “The reign without end”. The verdict inside was hardly more enthusiastic. “The victory of Thomas will not reconcile the Sky sceptics, any more than asking Donald Trump to get on board with theories of climate change,” it warned.

As for whether Thomas’s performance could be believed, it sat resolutely on the fence. “There are those who don’t understand how Thomas has waited to be 32 to crush everyone in the mountains. But there are others who point to a career path in several levels – Olympic titles, a passage on the road which saw him win Paris-Nice and the Dauphine – and begin to believe in his quality in grand tours.”

Le Monde, meanwhile, lamented Team Sky’s six “boring” victories in seven years and said it was due to its financial power and appliance of the numbers. “Cycling has become mathematics,” the paper wrote. “And Sky are the strongest in maths. It’s terrible.”

There will be some who dismiss this as sour grapes. Perhaps part of it is. But it would also be narrow-minded of British fans to whitewash the long and legitimate criticisms of Team Sky.

After all it was only in March that the digital, culture, media and sport select committee accused Sky of being “unethical” in its use of TUEs.

There are also unanswered questions over testosterone delivered to the Manchester velodrome which British Cycling and Team Sky shared, while a Team Sky doctor is still facing a general medical council investigation. It is hardly a good look either when Lance Armstrong’s former US Postal soigneur is still in charge of Team Sky’s service course in Belgium.

Yet it is hard not to warm to Thomas, who has remained droll and engaging even when the pressure has been greatest during this Tour. Given the current climate it perhaps also helps that he doesn’t have asthma, has never had a TUE, and when he broke his hip at the 2013 Tour he insisted on nothing stronger than ibuprofen.

Back in 2008 when his Barloworld team-mate Moises Duenas was busted for EPO, he also spoke out against doping in the strongest possible terms. “If someone is fraudulent in a business, wouldn’t they be facing a prison term?” he said. “I don’t see how riders taking drugs to win races and lying to their teams is any different. Bang them up and throw away the key.” Those words are encouraging especially in a sport like cycling, which – given its past – remains permanently on parole.

Meanwhile Team Sky’s performance manager, Rod Ellingworth, reckons that even at 32 Thomas has plenty more in the tank. “He really does have the full package and he’s matured in the past two years and taken it on,” he said, smiling. “And he’s still pretty ambitious, too.” – Guardian Service