Philadelphia: A ‘city of losers’ who could finally become winners 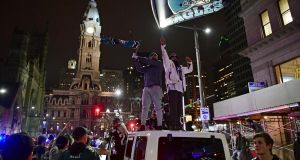 Philadelphia Eagles fans wave flags while stopped in traffic on North Broad Street near City Hall after their team secured their place in the Super Bowl. Photo: Getty Images

Philadelphia is a town where sports mean a little too much. So you can imagine the sensation around town with the Eagles back in the Super Bowl, one tantalizing win away from the snakebitten team’s first title in 58 years. When they last won the NFL championship in the winter of the Eisenhower administration, football was hardly the cultural behemoth it is now, still an afterthought to baseball, and even boxing, in the national consciousness. It was a full six years before the NFL title game was even called the Super Bowl, which to some means it may as well have never even happened.

It’s hard to articulate to an outsider what it would mean for the city if the Eagles upset the New England Patriots on Sunday night. There’s reason to believe they will. All year long the team has overcome injuries to key players, left tackle Jason Peters, running back Darren Sproles, middle linebacker Jordan Hicks and special teams ace Chris Maragos, without a hitch. A season-ending injury to second-year franchise quarterback Carson Wentz in December was meant to be the death knell, but they’ve not lost a meaningful game since as understudy Nick Foles has shone in relief.

So could this be the year it finally happens? If you’ve spent longer than 15 minutes in my hometown surely you know the answer: Of course not.

Being a Philadelphia sports fan is to forever expect a kick in the teeth. A lifetime of rooting for teams that always let you down has taught many Philly natives how to lose. Like in life. This is not a historical trend so much as it’s encoded in the civic DNA. Compound it with the city’s historic inferiority complex and you’ve got something worse than fatalism: it’s the perverse sense deep down that we don’t even deserve happiness.

Philadelphia at the end of the 18th century was the political and commercial epicenter of the young United States, a seat of art and fashion and intellect, the largest and most important city in America. The brightest minds of the day were drawn there by the overarching tolerance of dissent and opposing views engendered by the city’s Quaker roots, making it an important hub for new ideas.

But one by one those mantles of national leadership were stripped away, its international preeminence waned and the wounds persist to present day.

Philadelphia lost the national capital to the newly formed District of Columbia upon completion of the White House and US Capitol building in 1800. That had been the plan since the Compromise of 1790, but still stung the city that had served as the traditional meeting place of the Founding Fathers, the signing place of the Declaration of Independence at the Second Continental Congress in 1776 and the Constitution at the Philadelphia Convention of 1787.

Commercially, New York had been an afterthought to Philadelphia, its growth stunted while under British occupation for most of the American Revolution. But the geographic advantages of the Hudson River, which thanks to a tidal estuary didn’t freeze over like the freshwater Delaware, helped New York’s port surpass larger counterparts in Charleston and Boston and ultimately eclipse Philadelphia as the nation’s leading importer and exporter by 1803. In the quarter-century after winning the race to the country’s interior with the completion of the Erie Canal in 1825, New York’s exports tripled while its population quadrupled. Whatever symbolic claim to financial supremacy Philadelphia held was buried for good in 1836, when the city was rejected by the rest of the country with the failure to renew the charter of the Second National Bank.

In many ways Philadelphia has never recovered from these twin declines in political and commercial influence, which have fostered a cynicism and negativity that lives on. Suddenly, Philadelphia’s greatest achievements were the many US firsts on the historical ledger – first library, first hospital, first stock exchange, first medical school, first penitentiary – a looking-back which contributed to the city’s decline as an intellectual hub. The backward-facing attitude was best summed up by Mark Twain: “In Boston, they ask: ‘What does he know?’ in New York, ‘How much does he make?’ In Philadelphia, ‘Who were his parents?’”

Over time it came to alter the character of a city and would have a profound effect on the attitudes and worldviews of Philadelphians that persists to this day: a city of losers. Philadelphia’s sports teams have done little to counter the perception, battering the region’s collective psyche at least as much as the Erie Canal, Biddle and the Bank did and lending to their reputation, partially earned, of a famously surly fanbase.

The city’s baseball team, the Phillies, entered the National League in 1883. Not until their 97th season did they finally win a championship, the first of two in the club’s 135-year history. They’ve since become the first team in the history of professional sports to amass 10,000 losses. By contrast, the Philadelphia Athletics were highly successful – essentially the Yankees before the Yankees were the Yankees – so naturally they skipped town.

The NBA’s 76ers are the third winningest team in NBA history, but have won a scant two titles in Philadelphia and have been shoved to the margins in history by the Boston Celtics (17) and Los Angeles Lakers (16). The NHL’s Flyers won Stanley Cups twice in the 1970s, but have tripped at the final hurdle seven times since.

But it’s football that’s always united this blue-collar burg like none of the others, which is why it’s difficult to articulate to an outsider what an NFL championship would mean for this city. After all this time it just seems so unlikely. Only a megalomaniac would believe a sports team is cursed, but there’s a palpable tension and nervous energy around Philadelphia teams when the lights burn brightest that has a way of spilling onto the field. There’s no other way to explain why in the big games our wide receivers can’t catch and our jump-shooters can’t shoot.

Maybe Foles can do the unthinkable and lead the Eagles to their first championship since 1960. It is, after all, just one game. Anything can happen. But to expect anything but painful defeat and disillusionment would run counter to more than two centuries of American history. – Guardian service