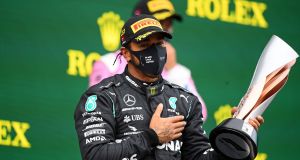 Lewis Hamilton celebrates after winning the Turkish Grand Prix and with it a seventh world title. Photograph: Clive Mason/Getty/AFP

Lewis Hamilton claimed the 2020 Formula One world championship at the Turkish Grand Prix with a remarkable win, taking his tally to seven titles to match Michael Schumacher’s record.

After a tense, difficult challenge in treacherous wet conditions Hamilton was in no mood to settle for the points that would have insured his title and instead sealed it in style. Such has been his dominance this season and, with his Mercedes teammate Valtteri Bottas managing only to take 14th, the championship secured his position as the most successful driver in the sport’s history.

Sergio Pérez was in second for Racing Point, with Sebastian Vettel third. The German’s Ferrari teammate Charles Leclerc was in fourth. McLaren’s Carlos Sainz was fifth.

Talking on the team radio after taking the chequered flag, Hamilton said: “For all the kids out there who dream the impossible … you can do it too, man. I believe in you guys. Thank you so much everyone for your support.”

Speaking to Sky Sports, he added: “We dreamed of this when I was young, when we were watching the grands prix … and this is way, way beyond our dreams. It’s so important for kids out there to hopefully see this – don’t listen to anybody that tells you you can’t achieve something. Speak it into existence, you’ve got to work for it, you’ve got to chase it. Never give up and never doubt yourself.”

Having started from sixth, Hamilton took his time ensuring he stayed out of trouble until the conditions came to him and he stormed to the front to take a memorable win that perhaps defines why he has been so unstoppable this season.

Schumacher’s records were thought to be untouchable but Hamilton has not only matched some and beaten others but is in every position to set new benchmarks way beyond the German’s tallies. He has already surpassed Schumacher’s records of race wins and poles with 94 and 97 respectively.

This season has been a lesson in why he has reached such heights. He has been simply indomitable with 10 wins and nine poles from 14 races; no driver has come close to even putting him under pressure, including Bottas, who is in identical, dominant Mercedes machinery. In a season truncated to 17 races because of the pandemic, Hamilton has still closed it out with three in hand.

He needed only to beat Bottas to ensure he sealed his seventh title but the world champion sealed it decisively, with no sense of being tentative given what was at stake.

The title also represents another milestone for Mercedes. Having secured the constructors’ championship at the last round in Imola, they now have taken a record seventh consecutive drivers’ and constructors’ double this weekend. They have been unbeaten as a constructor since the turbo-hybrid era began in 2014 and for most of those years have been quite untouchable.

Hamilton and Mercedes knew this was going to be a difficult race. They had been off the pace all weekend, unable to bring their tyres into the correct operating window in the low temperatures and with the track surface offering very little grip. The enthusiasm with which the drivers returned to Istanbul Park since it last hosted a race in 2011 had disappeared early in the weekend when it became clear that the track, which was resurfaced two weeks ago, remained very slippery, because the oils involved in the process had yet to dissipate.

Rain hit the circuit shortly before the off and conditions were treacherous on the opening lap. Lance Stroll led away from pole for Racing Point but Hamilton burst up the inside to claim third from sixth on the grid, while Bottas’s faint hopes had disappeared in mere seconds: he spun out after being clipped by Esteban Ocon through turn one, with the Finn relegated to 18th.

Hamilton soon had drama of his own, however, going wide at turn 10 on lap two to drop him back to sixth, while Vettel had done superbly to come through from 11th to third.

Stroll held his lead well from his teammate Pérez, with Red Bull’s Max Verstappen now in fourth as the frontrunners settled into a careful rhythm on the wet track, with both Racing Point cars looking comfortably in front of their rivals on pace. With the track drying the teams began pitting for the intermediate tyres on lap seven. Verstappen stayed out slightly longer on the full wets but after pitting, a slow stop meant he still emerged in third behind Stroll and Pérez.

Hamilton was tucked in behind Vettel in fifth, keeping up a determined effort to pass the Ferrari. Indeed attempting to do so sent him wide on turn 11 allowing Alexander Albon to slip past.

The world champion was frustrated he could not pass Vettel, who was holding him up and clearly still harboured hopes he could catch the leaders. Stroll, showing remarkable composure out front, was eight seconds clear of Pérez by lap 16 but conditions remained tricky, as Verstappen had a big spin trying to pass Pérez on lap 18 and had to pit, having flat-spotted his tyres.

As the teams opted to stick with the inters through the second pitstops, Hamilton once more made a decisive call. He had reeled in the two leaders and insisted to the team he could stay out.

When Stroll pitted Hamilton swept past Pérez for the lead at turn 12 and swiftly opened up a 10-second gap, showing real pace in the clear air. While across the circuit drivers were still spinning off in droves, Hamilton was on rails. He remained on track without taking a second stop and claimed the flag, the title and his position as one of the greatest drivers of all time with ease, 30 seconds up the road from Pérez.

Verstappen was in sixth and his teammate Albon in seventh. McLaren’s Lando Norris was in eighth, Stroll in ninth and Renault’s Daniel Ricciardo in 10th. - Guardian