Johanna Konta admits abuse will take time to get over 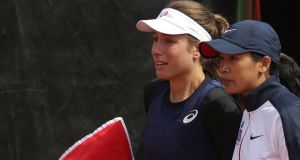 An emotional Johanna Konta leaves the court after Saturday’s action at the Fed Cup match against Romania in Constanta. Photograph: George Calin/Inquam Photos via Reuters

Johanna Konta admitted the abuse she received at the Fed Cup tie in Romania will take time to get over as Britain slipped to defeat.

Konta gave full credit to Simona Halep, whose 6-1 6-3 victory over the British number one set the stage for a day of home celebration at Tenis Club IDU in Constanta.

That left the visitors needing to win both the remaining rubbers but Romania completed the job in the next match when Irina-Camelia Begu defeated Heather Watson 6-4 7-5.

Konta had been left shaken after being verbally abused first by Romanian captain Ilie Nastase and then the crowd during her clash with Sorana Cirstea on Saturday.

Nastase was banned from the premises for the rest of the tie and a charged atmosphere was expected when Konta faced Halep, playing in her home city for the first time since her junior days.

After winning the first three points, Konta lost 10 in a row and, aside from a spell at the start of the second set, was unable to sustain any momentum.

The British number one said: “I think it’s really important for me to separate what happened yesterday and the tennis match today. I think Simona played well and came out and played a lot freer than I was expecting.

“There’s obviously an effect that yesterday had on me. However, it has to be about the tennis and I gave my best today with what I had.

“I think it’ll be something I’ll do my best to overcome and to just understand. It’s not something I’ve ever experienced before and I hope never to experience it again.

“I felt the crowd today were a lot fairer and I felt they supported Simona well.”

Salt was rubbed in the wound when Cirstea gave a press conference after the match accusing Konta of exaggerating what had happened for her own benefit.

The match was stopped for more than 20 minutes at 6-2 1-3 after Konta became tearful, with the British player winning five straight games on the resumption.

Konta said: “With all due respect to Sorana, she wasn’t on my side of the court, she didn’t feel verbally threatened, she wasn’t in my shoes.

“I think there may have been a lack of communication to her about what was going on on my side of the court and I do believe she only had half of the facts but I think nobody should have to put up with – in life or in any way – to feel verbally threatened and subjected to that sort of abuse.

“I’ve never had anything like that before, I’ve never been in an environment like that before. Hopefully in a few days’ time or a week or however long it takes, it will be something I look back on and say: ‘Well yes, at least that’s under my belt and another great experience’.

“But it’s not something I would wish anyone to go through.”

Halep stopped short of backing up Cirstea’s accusations of gamesmanship but was passionate in her defence of the crowd and used that as fire to help her defeat Konta.

The world number five said: “Yes I had extra motivation because in my opinion the public was very fair yesterday, they didn’t say anything bad, they just were supporting us, like today, and I want to thank them for being close to us even if this situation.

“I don’t want to say about Sorana’s comment. My opinion is that it [what happened] was a little bit too much, everything. Of course I’m not defending anyone but I’ll defend my public and our country because we were fair.”

The last comment was a reference to Nastase’s behaviour. It was Halep who called for the former world number one to be appointed captain last October.

An investigation conducted by the International Tennis Federation is ongoing into his actions on Saturday as well as at the draw on Friday, when he was heard to make an apparently racist remark about Serena Williams’S unborn baby and asked for British captain Anne Keothavong’s room number.

Halep said: “I don’t know what the people will decide about this. My captain is my captain, maybe he did [make] mistakes. I was not there right on the court but I heard some things so I cannot defend anything here.”

The second match was a tight and tense affair but ultimately it was world number 33 Begu, who had recovered from the stiff neck that ruled her out of Saturday’s action, that proved just the stronger.

The defeat extends Britain’s wait to return to Fed Cup World Group level into a 25th year, and they desperately need Konta to stick with the competition.

The 25-year-old stopped short of committing herself, saying: “I think that’s something that time will tell.

“I really enjoy representing my country and think the principles of what Fed Cup is about and the team environment is a great thing to be a part of.

“It’s unfortunate that the events of yesterday overshadowed this competition and especially our tie. Time will tell but hopefully I’ll still be involved.”