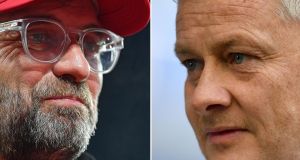 Wolves defender Willy Boly is back in training and poised for an instant recall after a month out with a thigh injury. Adama Traore (hamstring) will be assessed along with fellow winger Pedro Neto, who suffered an injury in the defeat to Everton. Jonny (knee), Raul Jimenez (fractured skull), Daniel Podence (calf) and Marcal (groin) are out.

Robert Snodgrass will make his West Brom debut but Conor Gallagher serves a one-game suspension and Conor Townsend (knee) remains sidelined. Karlan Grant (foot) is not expected back until next month but fellow forward Hal Robson-Kanu has returned to training after an arm injury and could return in Tuesday’s match at West Ham.

Leeds midfielder Kalvin Phillips serves a one-game ban but forward Tyler Roberts has recovered from illness and is in contention, while defenders Liam Cooper and Diego Llorente are also available. Midfielder Adam Forshaw (hip) and defender Gaetano Berardi (knee) are long-term absentees but boss Marcelo Bielsa has no new injury worries after the FA Cup defeat at Crawley, Brighton midfielder Yves Bissouma is back from a ban but Tariq Lamptey (hamstring), Adam Lallana (groin), Alireza Jahanbakhsh (knock), Aaron Connolly (hamstring) and Danny Welbeck (knee) miss out again. Midfielder Jakub Moder, recalled from a loan spell at Lech Poznan, has begun training with the Seagulls but will not be involved, although Steven Alzate may feature following illness.

Goalkeeper Lukasz Fabianski is set to return for West Ham at Darren Randolph’s expense after withdrawing from the starting XI at Everton on New Year’s Day as a precaution due to thigh problem. Wing-back Arthur Masuaku is still recovering from knee surgery.

Full-back Charlie Taylor, sidelined since suffering a hamstring injury against Sheffield United at the end of last month, is Burnley’s only doubt. Dwight McNeil returned from a groin problem as a substitute against Manchester United and could start, while striker Matej Vydra is also pushing for inclusion.

Cottagers club captain Tom Cairney has an issue with his knee and could be joined on the sidelines by Aleksandar Mitrovic, who had a slight problem in the FA Cup win at QPR but has returned to training. The injury list looks shorter with Kenny Tete, Terence Kongolo and Josh Onomah back, although Mario Lemina is not expected to feature because of an unspecified problem.

Leicester midfielder Dennis Praet will be sidelined for around three months after damaging a tendon in his hamstring. Top scorer Jamie Vardy (hip) and midfielder James Maddison (knee) are back in contention, along with right-back Ricardo Pereira (groin), winger Cengiz Under (hamstring) and defender Caglar Soyuncu (groin).

Saints are set to be without forward Danny Ings, who has been isolating after testing positive for Covid-19. Keeper Alex McCarthy and forward Che Adams are available but forward Nathan Tella and defender Mohamed Salisu have muscular problems and Oriol Romeu (calf), Moussa Djenepo (thigh), Nathan Redmond (hip), Jannik Vestergaard (knee) and Michael Obafemi (thigh) are out.

United’s injury problems are showing little signs of easing, with Chris Wilder expecting to be without seven players. The boss did not provide names but George Baldock, Enda Stevens, Jack Rodwell and Oli McBurnie were absent in the win over Newcastle and Lys Mousset was on the bench despite nursing a knock. Sander Berge (toe) and Jack O’Connell (knee) remain absent.

Tottenham are missing only Giovani Lo Celso for the trip north — the Argentinian midfielder is battling a hamstring injury which is set to keep him out of action until next month. Winger Steven Bergwijn is set to return for Jose Mourinho’s team in the contest at Bramall Lane after missing the last two games because of illness.

Liverpool boss Jurgen Klopp will assess Joel Matip in training before deciding whether to start the centre-back, who has missed three matches with a groin problem. If Matip is not ready Klopp will choose between youngster Rhys Williams or Nat Phillips. Meanwhile, midfielder Naby Keita remains sidelined with a muscle problem which has kept him out since December 19.

Ole Gunnar Solskjaer will give United’s players the chance to prove their fitness. Forward Anthony Martial picked up an apparent hamstring complaint in the win at Burnley and is among those who will be given Saturday’s training session to get themselves match-ready but defenders Brandon Williams and Phil Jones are definite absentees.

City are again without striker Sergio Aguero, who is isolating after being identified as a close contact of someone who has tested positive for coronavirus. Centre-backs Aymeric Laporte and Nathan Ake are out with muscular injuries but Eric Garcia is available again for Pep Guardiola’s team after overcoming Covid-19.

The Gunners will be without defender Pablo Mari, who misses out with the calf injury which ruled him out of Thursday’s goalless draw with Crystal Palace. It remains to be seen if Kieran Tierney (muscular issue) and Gabriel Martinelli (ankle) will be fit to return to Mikel Arteta’s side but Gabriel and Thomas Partey will be pushing for recalls.

Magpies midfielder Ryan Fraser serves a ban but full-back Jamal Lewis could return from a knee problem. Midfielder Jonjo Shelvey continues his fight for fitness after groin surgery, while Jamaal Lascelles will be assessed as he continues his recovery from Covid-19, with Federico Fernandez still struggling with the after-effects of a virus which has also sidelined Allan Saint-Maximin.