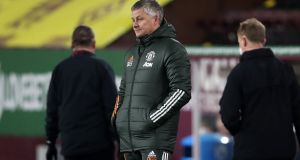 Ole Gunnar Solskjaer insists winning at Anfield would be an “upset” despite Manchester United heading to Liverpool top of the Premier League.

All eyes will be on Merseyside this Sunday as the bitter rivals do battle in an eagerly-anticipated clash that pits the reigning champions against the current league leaders.

Tuesday’s 1-0 win at Burnley saw United usurp Liverpool at the summit, putting them top of the standings at this stage of a season for the first time since Alex Ferguson bowed out as champion in 2012-13.

Jürgen Klopp’s men have the chance to go back ahead of United on Sunday, when Solskjaer believes his side head to at Anfield as underdogs.

“Being, of course, where we are in the league, that just gives us more confidence and it’s an indication of where we’re at.

“But the game against the champions, they’ve got an amazing record at Anfield in the league. They haven’t lost for many, many years so of course it’s a great test for us. Can we go there and cause an upset?”

“Our position at the moment is a product of all the hard work that we’ve done in the training ground and what the players are putting down every single day.

“We probably deserve to be where we are at at the moment but I don’t think many would have thought another word for it than an upset if you go six weeks back (and asked) if we beat Liverpool at Anfield.

“But we’re looking forward to the game and hopefully we can cause that upset.”

Solskjaer has failed to triumph in three previous meetings with Liverpool as United boss and faces the tough task of becoming the first visiting side to win a Premier League match at Anfield since April 2017.

“I think every team goes into every game thinking that they can win it,” the Norwegian said.

“We know that we can beat anyone anywhere on any given day, so to go into a game like this feeling that if we play to our best we can win is a good feeling.

“But we know we have to perform to our best and we don’t really think consequences after that. We just think about the performance.

“It’s a test and reality check of where we’re really at because we’ve won many, many tight games, scored a few goals in injury time, showed that mentality.

“We’ve not really set the world alight too many times and to win away at Anfield you really need to be at your best level.”

Klopp’s Reds are shorn of key players through injury, winless in three Premier League games and unable to call upon their home support while United have won nine matches during their current 11-game unbeaten league run.

“Form goes out the window when you play your rivals but our form gives us confidence so we’re confident going into the game,” said Solskjaer.

“We’re challengers and hunters and you want something that they’ve had and they have.

“Our mentality will be to work hard, to be humble and do our best and see what we can get out of the game.”

Solskjaer kept his cards close to his chest when it came to his options ahead of Sunday’s match, but the fact only two squad players are ruled out sounded promising.

“I’m going to give everyone a chance, another day,” he added. “Anthony (Martial) is not out of it.

“I think the only ones that are certainly out are Brandon (Williams) and Phil Jones. They’re the two that definitely cannot make the game.

“A couple of others may be doubts but we’re hoping, fingers crossed.”