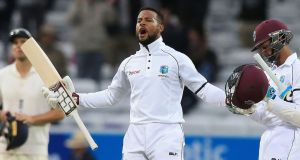 Hope triumphed over expectation in an enthralling final day on the magical, capricious turf of Headingley. West Indies brilliantly cruised past their victory target of 322, set by Joe Root on Monday, with five wickets and 28 balls to spare.

Their helmsman was Shai Hope, who with his fellow Bajan, Kraigg Brathwaite, forged the critical partnership, just as they had done in the first innings of a magnificent Test match. Hope struck his second century of the game, a feat that had never been achieved at Headingley in 533 matches. In itself this was remarkable but for the West Indies camp of far greater importance was a performance and a result that gives joy and hope to the legions of cricket lovers in the Caribbean.

West Indies had not won in England since the Edgbaston Test of 2000 and no one outside of their dressing room had given them much chance here on Tuesday morning. But Hope and Brathwaite reunited with the same composure that they had demonstrated on Saturday.

This victory was more stunning than the last successful West Indian run chase on English soil. Roddy Estwick, the bowling coach, made reference to Lord’s in 1984 on Monday night, when Clive Lloyd’s side knocked off 344 in 66 overs, but that team contained a catalogue of proven world-class batsmen. That has never been the perception of the 2017 tourists, though the estimations of Shai Hope, in particular, have rocketed in the last week.

Meanwhile Root joins a select band of England captains after this result: Norman Yardley, David Gower and Kevin Pietersen. Along with Root this is now the quartet who have declared in the third innings of a Test match and subsequently lost the game. Root is unlikely to be widely criticised for his declaration – after all, England were not playing Australia – but his side must be chastened after this topsy-turvy contest.

The first sign that this might not be a straightforward day for England was when Alastair Cook dropped a relatively simple catch at slip when Brathwaite was on four. Stuart Broad, the bowler, was not amused but after a bright opening partnership of 46 he just about broke into a smile when he dismissed Kieran Powell for 23. This time Ben Stokes obliged in the slip cordon.

The next catch to be dropped was by Broad himself yet this would still prove a source of some celebration. Brathwaite drove hard: Broad, following through, could not grasp the ball but instead it ricocheted from his fingertips into the stumps leaving Kyle Hope stranded. There were smiles all around the England camp, though on reflection they might have preferred Brathwaite’s wicket since the opener was always going to be more of a danger.

This was England’s last success for 40 overs and their exasperation mounted. After Broad had given away a boundary he was minded to kick the turf like Angus Fraser used to do, but he seemed to get his foot stuck in the soil and might have stubbed his toe. Jimmy Anderson could edge no nearer the magic 500 while Chris Woakes struggled to find a consistent line. The ball spun for Moeen but he was unable to apply much pressure by keeping a batsman trapped at his end.

Braithwaite belied his blocker’s reputation not with any extravagances but by moving positively into the ball and driving firmly. Occasionally he lofted an off-break to the boundary. Meanwhile Shai Hope, his self-belief soaring after the first innings, was sharp, stylish and composed.

His drives were sweetly timed, yet measured. Then just before tea England finally took a wicket. Brathwaite was within five runs of that remarkable Headingley record when he drove at a wide ball from Moeen. Stokes snaffled the catch at slip.

After the break, with the West Indies needing 123 from 35 overs, Root was reluctant to put too much faith in Moeen. Instead with the situation deteriorating he turned to his senior citizens, Broad and Anderson. This pair was determined to squeeze West Indies by bowling straight to a defensive field and they imposed some pressure by delivering three maidens in a row.

Hope, now joined by Roston Chase, was prepared to bide his time. Eventually Root recalled Woakes and Chase decided that this was the time to attack. He swung hard at Woakes’s first ball, which sped to mid-on. There was Mason Crane, the Hampshire leg-spinner, who had just come on to the field as a substitute for Broad. He took off to his left like a goalkeeper and grabbed the ball in two hands, a moment that might have changed the game as well as enhancing the good impression he has made within the England camp.

Out came Jermaine Blackwood and he was skittish from the start. Moeen was briefly recalled and Blackwood cracked a drive over mid-wicket; then he danced around the crease to Woakes as if this was a T20 match.

Root took the new ball as soon as it became available. By then 56 runs were needed from 16 overs and the tourists still had six wickets in hand. If anything this last throw of the dice from England heightened Blackwood’s audacity. He gave himself room to pummel Anderson’s second delivery back over his head for six.

Meanwhile Hope remained calm and secure, reaching three figures and delighting the statisticians with a scrambled single. But on 106, with 37 still needed, he launched off the back foot against Broad and the edge flew towards first slip. In the diminishing light Cook could not hold on. There was not much anyone could say.

Soon Blackwood took the precaution of removing his helmet for the victory parade and was promptly stumped with two runs required. It was more appropriate that Hope should hit the winning runs of a famous victory.