Federer and Nadal continuing to defy rivals – and father time 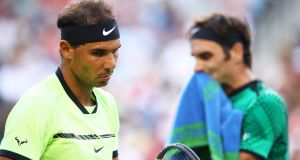 Roger Federer and Rafa Nadal: two titans could be poised to meet in the semi-final of the US Open. Photograph: Clive Brunskill/Getty Images

Roger Federer and Rafael Nadal have played each other 37 times over 13 years yet the US Open which starts on Monday provides a potential new twist to perhaps sport’s greatest rivalry.

The ‘Fedal’ show has never before stopped at the final Grand Slam of the season. Yet the two most successful players in tennis history are seeded to clash in the semi-final.

Having turned the clock back so spectacularly already this year it would have been a fitting end to an incredible Grand Slam campaign if any clash could have been kept for the final.

Failure to try and organise such a perfect denouement at least testifies to the integrity of the draw and most fans will regard Federer-Nadal as the real final anyway, no matter who emerges on the other half of the seeding.

That this is the case in 2017 is testament to the enduring class of two remarkable athletes, each of whose careers has been defined by the other.

Federer is 36 now. When he returned from six months on the injury sidelines in Australia last January it had been five years since the last of his previous 17 ‘Slam’ victories. Many feared the persistence of the sport’s greatest artist threatened to reduce him to little more than a nostalgia act.

Yet against all logic he won in Melbourne, beating his old nemesis in a final that must have been a supremely cathartic moment.

Federer’s claims to be the finest player tennis has ever seen had previously been vulnerable to the accusation that his record against Nadal represented proof he might not even be the best of his own generation.

Removing Nadal’s peerless dominance of clay from the equation, their head-to-head record on hard-courts and grass is still as close to equal as makes little difference. So the Swiss closing the deal when it mattered, and from what looked an impossible position, restored much of the lustre to those ‘G-O-A-T’ claims.

Nadal’s own rejuvenation is just marginally less unlikely. Knees which had seemed irredeemably crocked meant he too had slipped behind Novak Djokovic and Any Murray in the elite pecking order.

With a game always more susceptible to injury, and a decade and a half of attrition already in those Majorcan legs, once Nadal entered his 30s he could reasonably have been expected to enter popular affection the way old sporting gunslingers often do as their chances of actually winning fade.

Time waits for no one but it appears to have pressed pause on these two.

Now they go into the US Open as the two most likely winners. Nadal is ranked number one in the world yet Federer has the reassurance of having beaten the Spaniard again on a Miami hard court in April. His back is playing up but the incredible prospect of a 20th Slam is still within his grasp.

It defies logic but many insist Federer is playing better than ever. Nadal too looks a man reborn.

Instead it’s Djokovic who is sidelined for the rest of the year with a wonky elbow while Murray has pulled out of the US Open with a hip problem. There’s no Warwinka, no Raonic, and no youngster authoritatively barging his way through demanding ‘oldies’ get out his way.

It could be a decade ago when Federer won the fourth of his record five in a row at Flushing Meadow but with Nadal already haunting his every Grand Slam move. It’s this longevity of excellence which makes their rivalry deserving of being considered the ultimate.

Borg-McEnroe is always referenced in terms of sport’s great head-to-heads, especially in terms of their apparent ‘Fire & Ice’ clash of personalities. They met 14 times on tour but over a period of less than four years until Borg’s abrupt retirement aged just 27.

Coe-Ovett represented a clash of personality and style too. Who would ultimately emerge dominant was unclear for a number of years only for many observers to eventually regard Coe’s record and talent as the superior.

Whatever venom pulsed between the British athletes paled in comparison to boxing’s ultimate Ali-Frazier feud. Those three legendary fights over four years set the standard for grudge. There too however what many came to regard as the more admirable individual eventually had to concede superiority.

There’s nothing remotely venomous about ‘Fedal’. A couple of minor spats have never threatened to affect a relationship which seems to contain genuine regard for the other. Neither is interested in showmanship or comes with any particular personal baggage.

This is a rivalry truly rooted in sporting excellence and purity of competition. It’s come over a timeframe which makes it unique with arguments for each man’s superiority entirely valid. It may be 13 years since Nadal shocked the then undisputed world number one but the battle for superiority goes on.

A case could be made that such dominance by two veterans simply damns the new generation. There does seem to be a lack of outstanding talent coming through. Even more worrying is the paucity of substance about some among them whose greatest achievements to date seems to be in erecting even more towering monuments to their own self-regard.

It’s hard not to suspect though that we’re simply privileged to still enjoy the greatest one-on-one rivalry which all of sport, never mind just tennis, has ever witnessed.

If the glory of Federer and Nadal’s play is often a consequence of each other’s differing styles of play it’s the substance each man brings which is at least as important. That it should be enthralling the world 2017 is timely testament to enduring quality.