Gold for Paul O’Donovan and Fintan McCarthy in Austria 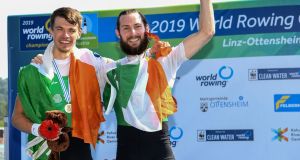 This was extraordinary. Paul O’Donovan and Fintan McCarthy won the most dramatic of finals to claim gold at the World Championhships.

Their semi-final of the lightweight double sculls had been heart-stopping, with three boats charging for the line. This was a completely different kind of victory.

Even by the standards of crews with Paul O’Donovan involved, their sixth place at 500m looked troubling. Italy and Germany had got out in front and looked to be making hay.

But from there this race resembed a wildlife documentary. Ireland began to close on their prey. A length behind, three-quarters, a half - and then level. From there they broke clear and swept home to cheers from not just the Irish but all those who revelled in such a spectacle.

“It was up there with the semi-final and on par at least with what myself and Gary did last year,” said Paul O’Donovan. Last year was theih first World Championship win.

McCarthy was new to this gold medal position, “Brilliant!” he said afterwards.

Earlier, Ireland booked their fourth Olympic boat for Tokyo 2020. Monika Dukarska and Aileen Crowley needed to finish in the top five - they took on the challenge by leading early on. Romania passed them, but in the mad scramble at the finish Ireland held on to second.

Dukarksa felt it was a wonderful moment for this crew: “Amazing! Everything - all those bad days, the tears and hard work and everything else. It’s sorted!”

The Ireland women’s four had a much harder task: they had to finish in the top two in their B Final. The crew of Tara Hanlon, Eimear Lambe, Aifric Keogh and Emily Hegarty did finish well, but Britain and Canada had grabbed the top two positions. Ireland closed on China at the finish but finished just short of them, in fourth.

In the era of qualifying boats for the Olympics, four places is the best tally for Ireland.

The tricky wind - a cross headwind - had by now had become a problem, raising questions about the fairness of the course in these conditions.

Earlier, Aoife Casey and Denise Walsh finished fifth in their C Final of the lightweight double sculls, 17th overall. Japan and China raced to the 1,000m, but China took over and won. Ireland, who were sixth through much of the race showed good speed in the final 700m. They passed Spain and closed up on Germany, who finished fourth.

There are seven Olympic places on offer here. Having missed out on those, the big question for this crew is whether they will be backed to go on and try to get to Tokyo through the Olympic qualifier in 2020.