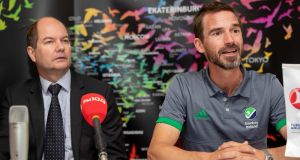 Alexander Cox has stepped down as coach to the Ireland men’s hockey team. Photograph: Morgan Treacy/Inpho

In the wake of Ireland’s chastening 4-0 defeat to Wales last Saturday, Alexander Cox admitted he would have to look in the mirror to see if the Irish men’s head coach role was still for him.

Three days later, he called time on his year in charge, saying the Green Machine need a “fresh start” for late October’s Olympic qualifiers, adding he feels it “is best for me to step back”.

The Dutchman endured a sharp baptism with a first-round exit from last December’s World Cup behind lowly-ranked China soon after he started the role.

Cox took on the role on an interim basis, combining it with his club role at SV Kampong. He replaced Craig Fulton who successfully switched to Belgium as an assistant coach and with whom he already has a World Cup and European gold medal.

Given the upheaval, the side got a pass for that low-key exit. This summer, however, saw Ireland lose to lower-ranked sides in world-ranking matches for the first time in a decade, falling to Egypt, France and, ultimately, to Wales to be relegated to the second tier in Europe.

After that defeat, an emotional Cox said he was considering his position, questioning if he was the right man to lead the Olympic pursuit.

“This tournament, obviously I wasn’t the right one. You have to be honest. As a coach, I am responsible and I failed to lead the group to better success. If I don’t see a future for myself, then its better not to stay on.”

And so, four days on, with his club role at Kampong kicking back into gear for the new season, he confirmed what many suspected.

“After taking some time to reflect on the past year, and the goals we have both achieved and failed to achieve, I have come to the decision that it is best for me to step back from this role.

“It has been a tough few weeks, but credit to the players and staff as they have given it their all at every stage. We just didn’t manage to pull together the result we felt we are capable of. At this time, I feel it is best for me to step back as coach so the team can have a fresh start towards the important Olympic qualifier.”

It gives Hockey Ireland a short timeframe once again to find a new coach to look after the side ahead of those Olympic qualifiers. The side will drop to 13th in the world when the new rankings come out in September, meaning they will play away from home in those head-to-head dates with one of Germany, England, Spain, New Zealand or Canada the destination.

On the women’s side, their performances in Europe will be enough to see them remain in eighth spot in the world rankings. Their Olympic qualifier will be at home against one of Belgium, Korea, USA or Canada.

Bryson DeChambeau trainer insists muscle gain is not down to steroids 09:05
Golf Majors return with US PGA, Man United progress in Europe 07:39
Sporting Cathedrals: Le Stadium - European fortress of the mighty Toulouse 06:00
Joanne O’Riordan: Why doesn’t streaming bonanza extend to women’s sport? 06:00
GAA playing the long game as they await loosening of spectator restrictions 06:00
Here is your handy guide to sport on television this week