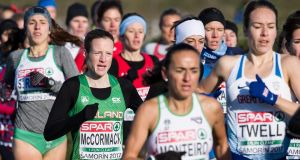 Not quite déjà vu all over again - Fionnuala McCormack this time not so much run off the European Cross Country medal podium by the still conspicuous presence of African runners, but rather never getting near it.

Unlike the last three years, when McCormack battled it out with the leaders only to be run out of the medals in the end, she found herself distanced early on: the flat, fast course in the Slovak town of Šamorín didn’t look entirely to her liking, and she finished up in 12th place.

Victory once again went to the Kenyan-born Yasemin Can, only cleared to run for Turkey last year, who became just the second woman to win back-to-back European Cross Country titles, McCormack being the first to achieve that feat in 2011-2012.

Still a day short of 21, Can looks set to dominate this event for a few years yet.

There was some hope there when the Irish senior men surpassed expectations to nail fifth place, helped perhaps by the new three-to-score rule: Sean Tobin finished 15th, Hugh Armstrong 19th, and Kevin Maunsell 24th, all three making their first senior appearance for Ireland.

Turkey won team gold there too, four of their five team runners Kenyan born, their swift switching of allegiance fast-tracked thanks to a loophole in the IAAF’s transfer rules - since thankfully frozen up.

For McCormack, any hope of making the medal podium was lost not long into the 8km race: Can promptly took control and won by 15 seconds from Meraf Bahta, the Eirtrean-born runner now representing Sweden, and Karoline Grovdal of Norway.

“I’m trying not to be too disappointed, because it always seems the same after races at this stage,” said McCormack, who at 33 was making a record 15th appearance in the event, and 35th international appearance in all.

“It just wasn’t to be today. I tried, but I was never really in the race, and it was just a case of struggling the whole way through, really. It was a very long 8km.”

Plus a practically track flat all the way, when McCormack would have preferred something a little more challenging: “I like the twists and turns, at least that adds something to it. It would have been nice maybe if there were a few hills. It was a bit better course than last year.

“But I still feel like I’m battling there, and it is a great championships, I really like competing here. I don’t want to come back just to make it my 16th time, and make up the numbers. I want to be back battling for the medals again, and I still believe I can. So yeah hopefully I will be back. There’s a World Half Marathon in March, then the European Championships in Berlin next August, so that’s two big targets.”

The Irish women’s team, with Shona Heaslip in 34th and Kerry O’Flaherty in 38th, ended up seventh out of the 13, somewhat disappointing having claimed bronze in 2014 and 2015.

The best individual finish on the day was Sophie Murphy, 10th in the junior women’s race, better still coming off the back of a long season at Iona College in the US.

The senior men were deservedly satisfied with fifth, Tobin and Armstrong also still based in college in America: “We were very close to France, and Britain weren’t too far away,” said Armstrong, the Mayo athlete who’d surprised a few in even making the team. “It’s the first senior championship for the three of us, and hopefully we can get back again with this team, get up a bit closer to the medals, maybe even win a medal.”

For Maunsell, who like Tobin runs with Clonmel AC, it’s a slightly belated breakthrough, as he’s now 36: “There was a great energy between the three of us, the last two laps,” he said. “I wasn’t going to drop off, nor were the lads. But I knew straight away I was having a good run.”

Despite that Kenyan-born presence at the front of both senior races, there was an unquestionable European resurgence across the junior and under-23 race: Germany went one-two in the women’s under-23 race, France doing similar in the men’s under-23, Norway produced the standout winner of junior men’s race in Jacob Ingebrigtsen, while Britain’s Harriet Knowles-Jones won the junior women’s title.