Joe Root steps up to give England hope for final day 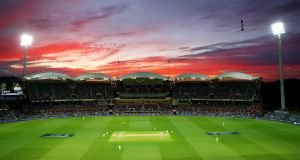 The sun sets over the Adelaide Oval on day four of the second Ashes Test. Photo: Cameron Spencer/Getty Images

After England’s traumas of the first two and half days it was remarkable that as the players left the field on the fourth night the outcome of the match had yet to be decided. Indeed it was not even certain which side was going to win. At the close England were 176-4. So they need 178 more runs for victory, Australia need six wickets.

This unexpected equation had three components. Firstly there was Steve Smith’s remarkable decision not to enforce the follow-on on Monday night, although it only came as a surprise to those who played in the 20th century; the modern cricketer does not appear to have the flexibility of mind to appreciate that enforcing the follow-on can be advantageous. Then there was England’s pace-bowling in Australia’s second innings; it was brimful of zest and discipline, spearheaded by Jimmy Anderson, who produced his first five wicket-haul in Australia and Chris Woakes, who took four wickets. Stuart Broad also bowled excellently and one day he might be persuaded to explain that he deserved at least one victim as a reward in that first session.

But the toughest part still remained, scoring 354 runs, and England fans could still dream about that on Tuesday night because Joe Root drawing on all his talent and resolve was still there on 67 after batting on a plane beyond his team-mates.

One of England’s problems in the series so far has been producing a major innings. Here their first three threatened again but could not consolidate significantly. Once again Alastair Cook batted calmly against the pacemen only to succumb to Nathan Lyon’s off spin for the second time in the match.

He is more vulnerable against this type of bowling than he was as a novice; the advent of the DRS cannot help but there is more to it than that. Here he was lbw on review as he attempted to nurdle a leg side single after he and Mark Stoneman had added a sparky 53 runs.

The sparkiness had come from Stoneman, who took 15 runs from a Mitchell Starc over with authoritative clips through mid-wicket. But when Cook departed the pressure was back on with a vengeance; Stoneman became tentative and jabbed a catch into the gully. Once again he had been very impressive in the early overs. James Vince also settled well, looking the part until his familiar exit edging behind when cover-driving.

At 91-3 it looked bleak for the tourists and there were now some close shaves; Root was given lbw to Lyon but reprieved on review. Then Australia betrayed their anxiety. They sought a review for a caught behind against Root off Pat Cummins – to no avail. In the next over they asked for another review for an lbw appeal from Hazlewood against Dawid Malan, quite a compliment for the left-hander. Again the ball was going over the stumps and suddenly both Australian reviews had gone in the space of five minutes. Beyond those anxieties Root timed the ball neatly on both sides of the wicket, scoring at a pace that few have matched in this game. However he lost Malan for a gutsy 29 10 minutes before the close, whereupon Woakes appeared as a nightwatchman with more talent than most.

If only England had displayed the same skill and resolution earlier in the match. Their pacemen were on song on Tuesday afternoon in a manner that would have been useful on Saturday. They capitalised on the excellent work of the previous evening. There was just one puzzling period when Root opted for five overs of Moeen Ali’s gentle off spin – he is not at his best at the moment – rather than entrusting more overs to Craig Overton.

However his fast bowlers were as accurate and frugal in the daylight as they had been in the dark. Yet again Anderson suffered the exasperation of seeing the umpire’s finger raised only to be denied by the review. This time it related to an appeal for a slip catch from the third ball of the day when Peter Handscomb was on strike. After much agonising the third umpire, Marais Erasmus, saw no contact.

The nightwatchman, Nathan Lyon, was hit on the helmet by a Broad bouncer and soon after holed out to mid-off against Anderson. Then came the more important wicket of Handscomb, who was neatly caught in the gully by Malan.

His innings was not a thing of beauty and it remains something of a mystery how his Test batting average hovers around 50. He gets into some extraordinary positions. The Australian Test selectors may well be scratching their heads about him and this knock also prompted a tweet about Handscomb from the sage PA man from Yorkshire, David Clough, which was brought to my attention: “Aussie-raised of English descent but reckon he must have learnt how to bat in Provence”.

Now Woakes struck at the other end. Tim Paine top-edged a bouncer and the ball swirled towards Overton at long-leg. The debutant may not have been in the perfect position for a very tricky catch but he made damn sure that he hung on to the chance. He willed the ball into his hands and kept it there as he hit the ground from a great height.

Shaun Marsh had been watchful again but after adding 32 runs with Starc he was bowled through the gate by Woakes. Starc soon became Anderson’s fifth victim and when Overton was summoned to replace Woakes he dismissed Hazlewood with his sixth ball of the day. A substantial target had been set but not quite in the manner planned by the Australian captain. Nor was that target quite as large as he had anticipated. – Guardian service

1 Awarding of 2023 Rugby World Cup to France part of Laporte investigation
2 Suarez’ Italian language exam rigged according to prosecutors
3 What next for green jersey hero Sam Bennett after toughest of Tours?
4 Gerry Thornley: Talk of Anglo-French hegemony is over the top
5 Two in custody in Tour de France doping investigation
Real news has value SUBSCRIBE

Tottenham’s Carabao Cup tie at Leyton Orient off but no decision on walkover 17:45
Digital passport system could ensure horse movements if Brexit deal agreed 15:45
Awarding of 2023 Rugby World Cup to France part of Laporte investigation 16:12
Suarez’ Italian language exam rigged according to prosecutors 14:24
Why this weekend’s Champions Cup semi-finals are still worth watching 13:32
Here is your handy guide to sport on television this week