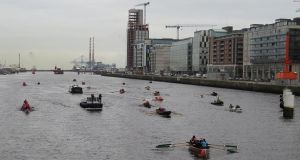 The flotilla of craft which took to the Liffey for the All-in-a-Row charity event on Saturday. Photograph: Liam Gorman

Over 40 boats turned out for the All-in-a-Row charity event on the Liffey on Saturday. Kayaks, canoes, dragon boats, currachs and pleasure craft were just some of the vessels which took to the calm waters between Thomas Clarke Bridge and Grattan Bridge. Many of those who braved the cold day wore festive outfits.

Wreaths were laid and the Last Post played (by Pat O’Connor of the Communications Workers Union) at the event in aid of the RNLI and the Irish Underwater Search and Recovery Unit (IUSRU).

At a reception attended by the Deputy Lord Mayor, Chris Andrews, the RNLI’s Gareth Morrison told the guests that 133 people died by drowning in 2016. The institution hopes to cut coastal drowning by half by 2024.

Richard Kaye of the IUSRU pointed out that his group, which helps recover bodies for families of those who are missing in rivers, canals, lakes or at sea, is entirely made up of volunteers. It has high overheads but little funding, so it welcomes the chance of establishing a profile and bringing in donations. “Events like this are important,” Kaye said.

A contribution was also made to the St Vincent de Paul and a tribute paid to the men who died on the Kyle Clare, which was torpedoed 75 years ago in the Bay of Biscay. Four of the dead came from Ringsend.

The poet Theo Dorgan read his poem Lifeboat. Dorgan is a sailor. “Each time I donate to an RNLI collection I feel like I’m taking out insurance!” he quipped.