Ben McAdoo has been fired one week after benching Eli Manning 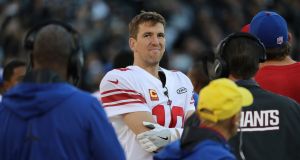 Eli Manning of the New York Giants during the game against the Oakland Raiders. Photograph: Jim Wilson/The New York Times

Ben McAdoo has been fired as head coach of the New York Giants, a season after leading them to the playoffs.

The 40-year-old seemed to have a bright future with the team after leading the Giants to an 11-5 record last season but they have struggled badly this time around, and are currently 2-10, tied for the second worst record in the entire NFL along with the San Francisco 49ers.

McAdoo’s firing comes as little surprise. Although there have been some mitigating circumstances – the team’s best player, Odell Beckham Jr, has been sidelined by injury – the Giants’ owner, John Mara, said last week that he was “embarrassed” by the team’s record this season. McAdoo had also attracted criticism after the Giants’ quarterback Eli Manning was benched after 210 straight starts. There have also been discipline issues within the Giants: McAdoo suspended two players for violating team rules earlier in the season.

McAdoo himself appeared to be ready for Monday’s news. “I understand where the fans are coming from,” McAdoo said after Sunday’s loss to the Oakland Raiders. “If I was on the outside looking in, I’d feel the same way they feel.”

The Giants also fired general manager Jerry Reese on Monday. Reese had been the team’s GM since 2007 and they had won two Super Bowls during his time in New York.

McAdoo, who was the team’s offensive coordinator until he stepped up as head coach, had struggled to win over fans in the high-pressure sports environment of New York. His dress sense was widely mocked, while a 12-year-old McAdoo impersonator seemed more popular than the coach himself.