Alex Hales available for Ashes selection after being cleared by police 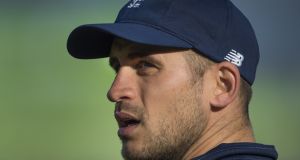 Alex Hales has been cleared by police and is now available for England selection for the Ashes. Photo: Getty Images

The fallout from the Ben Stokes affair could bleed into England’s plans for the one-day series in Australia after Christmas, with both the all-rounder and Alex Hales looking set for inclusion in the squad this week.

Stokes remains suspended from international duty but Hales is free for selection after confirmation he is deemed a witness not a suspect regarding the incident in Bristol on September 25th.

Eoin Morgan’s touring party was due to be announced at the end of the English summer until Stokes’s arrest over the incident. Though the selectors had no choice but to press ahead with the Ashes squad that week, the 50-over side was pushed back. But they will now publish their plans after the conclusion of the second Test in Adelaide and both players are expected to be provisionally included. As in the case of Stokes’s absence from the Ashes series, this does not guarantee both will tour.

Stokes is waiting to discover whether he will be charged after Avon & Somerset police handed his case over to the Crown Prosecution Service last week, with the timing of his cricket disciplinary hearing – and any lifting of his suspension - dependent on the outcome. The England and Wales Cricket Board will not begin an internal disciplinary process for Hales or Stokes until the conclusion of any potential criminal proceedings related to the incident. In short, it all remains a bit of mess.

As well as alerting the England selectors and management to Hales’s availability, the ECB also approved a “No Objection Certificate” to allow Hales to play in Dubai in the inaugural T10 Cricket League just before Christmas.

Neither has played for their country since the third one-day international against West Indies on 24 September, the match they were celebrating when Stokes was arrested on suspicion of actual bodily harm at 2.35am, before being released under investigation.

Stokes made a domestic comeback for Canterbury in his native New Zealand on Sunday and would naturally slot back into England’s one-day side when available. Hales, however, may face a battle to win back his spot as opener after Jason Roy saw out the remainder of the West Indies series in his place and made scores of 84 and 96 alongside Jonny Bairstow.

England take on Australia in a five-match one-day series that begins at the Melbourne Cricket Ground on 14 January, before wrapping up at Perth’s new stadium a fortnight later. The two countries then play a Twenty20 tri-series with New Zealand before England’s epic winter continues on the other side of the Tasman with five one-dayers and two Tests. – Guardian service