Farah and Bolt unable to bow out on their terms 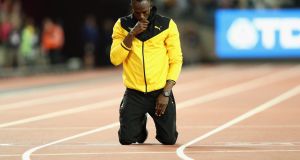 The worry with any baton exchange is they don’t always go to plan. Neither Mo Farah nor Usain Bolt leave London with the sort of final handover they had planned, but everything that unfolded on the last wild night inside the London Olympic Stadium suggests athletics was ready to pass on the baton anyway. Especially when it came down to the relays.

For Farah, losing his last championship race on the track had played out like a bittersweet symphony, especially given some of the hard questions that followed; for Bolt, actually dropping the baton in the sprint relay after rolling to the track injured will hardly damage his legacy but raises another question.

Although what took centre stage on the final night inside the London Olympic Stadium may always be questioned – Caster Semenya running the fastest 800m in the world this year to win her third World Championship title, in 1:55.17, still unbeaten in two years.

That third gold medal goes with those won in 2009 and 2011, before the IAAF’s ruling on intersex athletes and hyperandrogenism, during which time Semenya failed to medal at the last two World Championships; that ruling was then suspended, in late 2015, and the South African woman hasn’t a lost a race since.

With the IAAF’s original ruling being reconsidered, this event may look a little different next year, but for now there is no disputing Semenya’s superiority.

Surrendering his dominance in the men’s 1,500m was the three-time defending champion Asbel Kiprop, fading to ninth after a crazy last lap that still saw Kenya go one-two thanks to Elijah Manangoi and Timothy Cheruiyot, won in 3:33.61, with the young Norwegian Filip Ingebrigsten running a brilliant race to win bronze, holding off the Spaniard Adel Mechaal by .18 of a second.

There was an equally impressive display from Kenya’s Hellen Obiri on the last lap of the women’s 5,000m, ruining a distance double for Almaz Ayana from Ethiopian, a country still high on the IAAF watch-list when it comes to anti-doping.

Neither Farah nor Bolt will be at the next World Championships in Doha, although Qatar already have their superstar after Mutaz Barshim confirmed himself the best high jumper in the world with a gold medal winning height of 2.35m.

That Farah gave it his all was undeniable: likewise that Muktar Edris of Ethiopia was the better runner on the night, getting in front of Farah on the last lap and simply never surrendering, winning in 13:32.79, slow by championship standards, imperiously executed tactically.

At a press conference staged by British Athletics yesterday morning, Farah was again asked about his enduring association with coach Alberto Salazar, still under investigation by the US Anti-Doping Agency into his methods of training at the Nike Oregon Project.

“It’s like a broken record, repeating myself,” said. “If I’ve crossed the line, if Alberto’s crossed the line . . . why bring it up year after year, making it into headlines? I’ve achieved what I have achieved – you’re trying to destroy it.

“I am a clean athlete, have put my balls on the line, year after year, running for my country. So many times, you guys have been unfair to me. I know that. But say it how it is. History doesn’t lie. Sometimes I find it bizarre how certain people write certain things to suit how they want to sell the story.”

As farewells go then these were spectacularly surprising – Bolt pulling up injured in his last race on the track, the 4x100m relay: the Jamaican’s blamed a delay in the call room before the event on Saturday night as part of his problem, except of course it was the same for everyone, and didn’t stop Great Britain winning gold in 37.47, the fastest in the world this year, ahead of the USA’s 37.52, with Japan in third in 38.04, a season best.

Bolt limped over finish line, but still got to run his final lap of honour here last night, and his legacy remains intact: 11 World Championship gold medals won over the last decade, two silvers, and not forgetting the Bronze medal won in the 100m final last weekend. Not forgetting his eight Olympic gold medals.

The question there is whether the Bolt supremacy was ultimately good for the sport.Great Britain won two more medals on the last night, their 4x400m women winning silver behind the US, anchored by the brilliant Allyson Felix, bringing her overall championship medal tally to 16, having also won gold in the 4x100m on Saturday night. Their men won bronze, that race seeing Trinidad and Tobago upset the once unbeatable Americans. The baton passes on.

Equestrian: Irish riders have to settle for placings in Florida 12:57
Cork hang on against Tipperary to maintain 100 per cent record 11:59
James Guinness the cream of Down as late goal sinks Longford 11:49
Tyson Fury king of the world again after he stops Deontay Wilder in the seventh 11:10
Justin Thomas takes third round lead as Jon Rahm fires 61 12:15
Here is your handy guide to sport on television this week