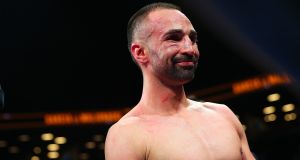 Questions about Conor McGregor’s preparations for his fight with Floyd Mayweather have surfaced again after his sparring partner, the retired boxer Paulie Malignaggi, said he will leave the Irishman’s camp and described the event as a “fiasco”.

Malignaggi told ESPN he was angry that photos had emerged of McGregor getting the better of him in the ring. One photo shows McGregor apparently sending the former world champion to the canvas. Malignaggi insists he was pushed, and wants video of the session to be released to show what he says is the full story.

“I didn’t want to become the story, and that’s what this has turned into,” Malignaggi told ESPN on Thursday. “I won’t release any information about his game plan or what he’s working on – I wouldn’t do that. But this has become a fiasco. It’s a circus.

“And I do want that sparring video released. The UFC’s PI definitely has that video. I understand it can’t come out now, but Conor, if you have any balls, release what really happened.”

Malignaggi added that he and McGregor had “a mutual respect inside the ring” and that his departure was related to matters outside the ring.

McGregor, famed for his UFC career, faces Floyd Mayweather in a boxing fight on 26 August in Las Vegas. The fight has been criticized as a money-making stunt: the 40-year-old Mayweather is considered one of the greatest fighters of all time, while McGregor has no professional boxing experience. Both men could make over $100m from the fight.

However, the run-up to the bout has received negative attention. McGregor called Mayweather, who is African American, “boy” in their first press conference, a comment widely seen as racially insensitive, including by Mayweather himself. The American went on to call McGregor “a faggot”.

Tickets for the fight at Las Vegas’s T-Mobile Arena, which cost up to $15,000, have also sold slowly.