Patsy McGonagle on the ‘brutal’ realities of elite athletics 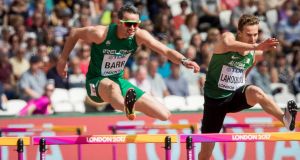 Thomas Barr: affected by illness which forced him to withdraw from his 400m hurdle semi-final at the World Championships. Photograph: Morgan Treacy/Inpho

When Patsy McGonagle talks about the “brutal” realisation of what these World Athletics Championships have so far brought he means the sheer magnitude of competition.

It’s a little early to be delivering a verdict on the Irish team performance, although that will soon be judged on its own merits.

What is certain is that he’s leaving nothing to chance with the athletes yet to compete in London. This is his sixth – and last – World Championships as Irish team manager, and McGonagle knows from considerable experience that safe is always better than sorry.

It’s the reason he’s found alternative accommodation for the four remaining Irish athletes – a suitably safe distance away from the team hotels experiencing the increasingly rampant outbreak of the vomiting bug gastroenteritis.

Race walkers Rob Heffernan, Brendan Boyce and Alex Wright don’t arrive in London until Thursday, ahead of their events on Sunday, and championship organisers the IAAF have agreed to provide a different hotel to where the Irish team are staying, the Guoman Tower Hotel, adjacent to historic Tower Bridge. Síofra Cléirigh Büttner, who runs in her 800m heats on Thursday evening, has also been transferred to a different hotel.

So far then Thomas Barr remains the only Irish athlete to have been affected by the illness, which forced him to withdraw from his 400m hurdle semi-final on Monday evening – although around 30 athletes from other teams, including Germany, Canada and Botswana, have also experienced similar illnesses, including the norovirus, better known as the winter vomiting bug.

For McGonagle, Barr’s withdrawal was particularly hard to stomach, given he’d presented Ireland’s best chance of an individual finalist on the increasingly widening, or indeed narrowing, World Championship stage, depending on how it’s viewed.

“It is brutal game at this level, and I believe it’s getting more competitive all the time,” McGonagle told me, a reasonable safe distance away from the Guoman Tower Hotel. “People at home really need to understand this is a properly global game, 200 countries-plus, and that standard is getting more brutally tough all the time.

“You look at the women’s triple jump final on Monday night, Columbia versus Venezuela, two more emerging nations there. It’s a very tough business. So just getting here is definitely an achievement. Moving from heats, to semi-finals, or especially finals is another achievement beyond that.

“And you think back to say Sonia O’Sullivan’s time. An individual performance would often gloss over the overall performance. The general public would key into that lead it, but the general story beyond that wasn’t always great. Social media has changed things dramatically as well. It’s becoming a more opinionated game, and it’s not all knowledgeable opinion.”

McGonagle in fact started out as Irish team manager at those 2000 Olympics in Sydney, where O’Sullivan won her silver medal in the 5,000m: he’s also served in that position at the last three Olympics, numerous European events, indoors and out, these World Championships in London coming 10 years after his first as Irish manager, in Osaka 2007.

Everything he’s seen in London so far demonstrates a sport that although ailing a little due to doping allegations, still seems in that brutally robust health on both the track and field.

“I think they’re making effort, and I do believe in Sebastian Coe,” says McGonagle. “Of course he’s political and all the rest of it, but they’ve got a massive job on their hands. Usain Bolt has carried the sport the last few years. But looking around London, the stadium is full every night, and I was very impressed by the numbers who came out to watch the marathon last Sunday.

“So the interest is there, but we need personalities. I think dopers should be banned for life, no way back. They were caught on the hop with Gatlin, but they sooner they get to the position where if you’re caught for doping you’re gone then the better. No more messing.”

Only now the race walkers, particularly Heffernan, offer the last chance of some proper Irish success: Heffernan, upgraded to Olympic 50km bronze from London 2012, and World Champion a year later, also finished fifth in Beijing two years ago, and his chances of another medal of Sunday have been further boosted by the news 2015 silver medallist Jared Tallent from Australia has withdrawn injured. Also out is defending champion Matej Toth from Slovakia due to an alleged doping offence.

“In fairness the walkers have always gone out on a limb to be the best they can be, and I don’t know if people understand that,” he says.

“Go back to Pierce O’Callaghan, Jamie Costin, they travelled the world to learn about walking, and there is a real culture of walking in Irish athletics. You can think whatever you want about walking, but the reality is the likes of Rob, Brendan Boyce, have put everything else in their life away to be the best they can be. Olive Loughnane was the same. And there is a lesson in the walkers, and their approach to the event, for every other discipline in the sport.”

McGonagle was the first man to throw his arm around Heffernan when he finished fourth here in London in 2012, though immediately assured him it wouldn’t be the end of the story (knowing full well the Russian winner Sergei Kirdyapkin was doping, as has since been proven).

“And I know plenty of other athletes have been denied medals in the past. Derval O’Rourke, Mark Carroll. Sonia of course. It’s been brutal in that way too.”