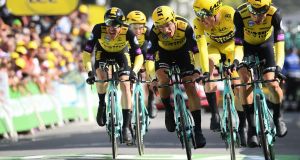 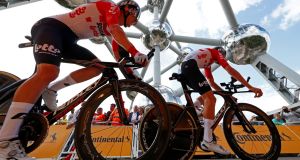 The best-laid plans of Geraint Thomas and Egan Bernal were undone at the very last in the team time trial stage of this year’s Tour de France as the Jumbo-Visma team of stage one winner, Mike Teunissen, swept past Team Ineos to take an emphatic win.

For a team that is so focused on recovery and saving energy, it was a long afternoon for Ineos, awaiting the final outcome. A frenetic half hour of racing by their eight riders was followed by the best part of two hours sitting in two rows of four, in the ‘hot seats’ reserved at the finish line for the team with the best time. But instead of celebrating a long-awaited success, they were ousted, racking up their third second place in the discipline before returning to their team bus in deflated mood.

Their hopes of a stage win may have been thwarted, but Thomas remained upbeat. “I think we rode well, we communicated well and a couple of times I thought we might have changed a little quicker,” he said, “but everyone was riding really strongly, so we can’t be too disappointed. We knew we’d start early, but time checks aren’t really something you can ever really pay much attention to anyway, not like in an individual time trial.”

For other yellow jersey hopefuls, such as Richie Porte, French favourite Romain Bardet, and perennial contender, Nairo Quintana, it was a disappointing afternoon. Both are now almost a minute behind Thomas and Bernal.

“We did a really good ride with what we’ve got,” Porte, once touted as a potential Tour winner by Team Sky, said. “Knowing what the Pyrenees and the Alps are like, it’s going to be tough. I’m not going to throw the toys out of the cot just yet. The climbing stages are coming and there’s still a long way to go.”

Bardet meanwhile, just shrugged his shoulders and took yet another time trial time deficit on the chin. His near 60-second gap to Team Ineos means that he is already languishing in 108th place, 1:29 behind race leader Teunissen, after just two stages. It will take some aggressive racing later in the Tour to recoup that time.

Instead of Bardet, French hopefuls will now look to Thibaut Pinot, whose Groupama-FDJ team excelled themselves to finish eighth, just 12 seconds slower than Ineos. Pinot, third overall in 2014, lives and trains close to the finish for Thursday’s stage to La Planche des Belles Filles.

“Everyone expected us to lose a minute but we knew we were capable of putting in a good performance,” he said. “This Tour has started really well and I’m looking forward to getting to my neck of the woods on Thursday.”

Jakob Fuglsang, shaken but not stirred by Saturday’s unavoidable face-plant onto the Belgian tarmac towards the end of stage one, recovered well to limit his Astana team’s losses to Thomas and Bernal.

“I was not feeling 100 per cent, but day by day it will come back,” the Dane said of his injuries. “I’m quite happy with the time we lost to Ineos and that I could also take my turn with the guys because I was worried that I wouldn’t be able to.

“I think we did a decent team time trial. I said before the TDF started that for me even 30 seconds would be okay. The cut over my eye is not a problem, but the knee is the worst thing and that’s what you need here, but it should be okay in a few days,” he said.

Fuglsang is not the only one in recovery mode as the Dimension Data team of Mark Cavendish continued to battle to heal the self-inflicted wounds caused by the furore over the British rider’s non-selection.

The cracks in the relationship between team owner Doug Ryder and sports director and Cavendish confidant, Rolf Aldag, have been papered over, at least for now.

“We have to do what’s good for the team,” the German said. “I’m obliged to do that. Everything has been said and discussed about what happened before the Tour. I’m not really happy that it was discussed publicly.”

“The fact Mark Cavendish is not here is unchangeable,” Aldag said. “We’re not playing football, we can’t bring in a replacement rider so this is going to be the last time talking about it. I feel sorry for the eight guys on the bus because they look outside and think what is he going to say now?

“I think I can be helpful to the eight guys here and that’s what I focus on. I’d just like to put the story to bed and move forward. I don’t think it’s fair to irritate the riders who are here, by having controversial discussions in public, it makes no sense.”

Stage three of the 2019 Tour heads into the Aisne and Marne, before a succession of short, sharp hills through the Montagne de Reims national park lead to the finish in Epernay. A tumultuous finale is expected, but it is unlikely to be Dimension Data who are popping the champagne corks.