Coco Gauff’s journey ends at the hands of Sofia Kenin 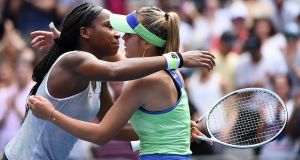 It’s tough being a young American tennis prodigy – especially when there is a younger version across the net, so Sofia Kenin’s win over Coco Gauff on Sunday afternoon not only propelled her into the quarter-finals of a slam for the first time but visibly filled her with emotion.

“I did the best I could to block out the hype. I played my game and fought for every point. First set, she played some really good points at crucial moments.”

Kenin, ranked 15 in the world and 42 places ahead of the fast-rising Gauff, is having the best slam of her young career - yet all the talk beforehand was about Gauff, who had beaten the defending champion, Naomi Osaka to reach the fourth round.

“I just played my match,” Kenin said, “trying to win every point.” On Tuesday, she plays the unseeded Ons Jabeur – who put Johanna Konta out in the first round and, on Sunday, was too good for the Chinese world No 27, Qiang Wang, who upset Serena Williams but was powerless to stop the Tunisian winning 7-6 (4), 6-1 in an hour and 17 minutes.

Gauff, whose run to the fourth round has lit up the tournament, fought hard but tired, hitting 48 unforced errors, including seven double faults, in two hours and nine minutes. Kenin, born in Moscow and raised in the United States, played with all the tenacity of her hero, Maria Sharapova.

Cool and determined in a combative opening frame, she saved set point, forcing the tie-break when Gauff, going for everything but cramped on the baseline, hit a forehand long, her 19th unforced error in 50 minutes of a close, tense contest.

The pressure told on Kenin in the shootout, her second double fault handing Gauff a 2-5 lead. Kenin saved the first of four set points in a sharp volley duel at close-quarters. She clipped the net to save another. Gauff gifted her the third, again overcooking a forehand, a sure sign of nerves. But she had one more in her pocket and the ball in her hand; a decent serve was too hot for Kenin.

Gauff, whose serve was knocking like a malfunctioning gearbox, did more than win a set of tennis; she proved her mental strength. But the ride to the finish would be bumpy.

Her resolve was tested further in the second set as she hit three double faults in her second service game to go with five earlier mistakes, and trailed 1-3 when she botched a volley at the net. Half an hour into the set, Kenin was 5-2 up. Gauff saved set point, stroked a beautiful forehand into empty space and held with a backhand that kissed the line.

Kenin grabbed three set points – and served her fourth double fault, before levelling at a set apiece when Gauff stuck a return into the tramlines.

When Kenin broke at the start of the third, the Coco fairytale looked to be unravelling like a politician’s promise. Gauff dumped a backhand to go 0-3 down, and the end beckoned. Kenin broke again, after stiff resistance, but held to love. After two hours, Gauff was serving to stay in dreamland.

The Kenin winners kept flowing. She worked her way to match point – and hit a forehand into the net. She forced a second opportunity. Gauff hit long. They hugged warmly at the net, Kenin soaked up the applause, and sobbed in her chair.She was well worth the win, reaching her first slam quarter-final.

In a match guaranteed to put a young American into the quarter-finals, Gauff and Kenin went about their business for intermittent stretches without the attention of their nation’s TV rights-holder, ESPN, who otherwise trained the wisdom of John McEnroe and company on Novak Djokovic’s straight-sets stroll against Diego Djokovic.

The seven-time and defending champion took just over two hours to reach the quarters for the 46th time with a routine 6-3, 6-4, 6-4 win. – Guardian