Ian O’Riordan: getting inside the secret of the Dublin Track Club 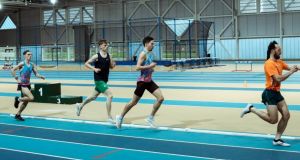 It’s Thursday morning in the Phoenix Park and their meeting place is the car park next to the Papal Cross. Some arrive by bike or bus, others have car-pooled, the rest dropped off by their parents. Most have come from near and some are currently afar and a couple more originally started out from Ethiopia and Somalia.

They know to be here for 10am, rain or shine, and know in advance what exactly is in store. None of this is any secret in itself, only word of the Dublin Track Club - also known as the DTC - is only now getting out. In some cases the results are also speaking for themselves, and I’m here to get some inside on the success of it.

Among the group of 16 is Andrew Coscoran, the 23 year-old who last month in Boston ran the fastest Irish indoor mile in six years, his 3:56.85 dead-heating with Craig Engels, the American champion. Coscoran followed that up with a 3:37.98 for 1,500m, then another 3:57.83 at the famed Wanamaker Mile. A little over a year ago Coscoran was by his own admission in danger of being lost to the sport, after taking up a running scholarship at Florida State University. He left after one year; now he’s favourite to win a first 1,500m title at this weekend’s Irish Indoor Championships at the Sport Ireland Arena.

Coscoran will however be pressed hard by another DTC member Brian Fay, the 21 year-old who ran a 4:00.77 mile in Athlone earlier this month. Also among them is Hiko Tonosa, who gained refugee status Ireland in February having fled his then war-torn region of Ethiopia in 2017; Tonosa, who won the Irish 5,000m title last July, starts as the favourite to win the 3,000m.

Coscoran, Fay and Tonosa share the same 10km “floating” session this morning, which is another sort of secret of the DTC: there is nothing wrong with being the lonely distance runner, only the best ones often require some pushing. Among the group too are three women distance runners - Iseult O’Donnell, Emma O’Brien and Aoibhinn McGoldrick - along with Mustafa Nasir, originally from Somalia, and promising juniors Shane Coffey, Stephen Fay and Daniel Stone.

They all head off for a three-mile warm-up as I chat with their coach and DTC founder Feidhlim Kelly, who is certainly no stranger to Irish distance running. I first met Kelly in the house were Con Houlihan used to live on Martin Street in Portobello. He wasn’t long out of Belvedere College with some journalistic aspirations and they were master and student for a good while, Kelly also qualifying as teacher, before a mixture of fate and faith eventually conspired to allow him start up the DTC around the summer 2017.

“The idea obviously first came from the Melbourne Track Club, which was started up by Sonia O’Sullivan’s husband Nic Bideau in Australia. I would have spent some time with Sonia and Nic around the time they were still living and training in Teddington in London, and started out myself to try to make it as a runner.

“The first thing you have to do is to get the athletes to buy into the philosophy, which is built around the old rules of distance running, the discipline, the will to train, the desire and the self-belief, because without any of that there is nothing. Then it’s about getting runners to a higher level, show them a way to do that. It’s also a sort of vocation for me, you also have to be fanatical, have that deep immersion in what you’re doing.”

The Dublin Track Club is not affiliated with Athletics Ireland, nor does Kelly intend it to be: the athletes continue to represent their own clubs. The group is growing fast too: Seán Tobin and Michelle Finn have been training with the Melbourne Track Club since the beginning of January, both still eying Tokyo qualification, Finn well positioned already to make it in the 3,000m steeplechase. The group also includes marathon specialists Gary O’Hanlon and Cillian O’Leary and Shane Healy, who ran the 1,500m at the 1996 Olympics Atlanta, and now aged 50, continues to break records in the Masters category.

Afterwards it’s a short car-pooled spin with the group to Wetherspoons in the Blanchardstown Centre for the cheap breakfast and unlimited coffee, where Kelly further expands on his coaching philosophy and goals of the DTC: “we don’t get any funding, and of course we are always looking for it. None of these runners even have a shoe contract, but to me having the support of someone like Nic Bideau counts for a lot more than that, helping to empower me to do something like this.

“We don’t need a whole lot, my only investment so far was buying a €600 fold-up bike so I can follow them on some of the training runs. It’s also about keeping the head down, believing the breaks will come. It is that simple, in many ways, but again trying to get people to buy into it. Distance running is a hard game. So show up and do the training. If you don’t want to show up then f*** off.”