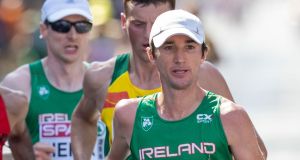 Some secondary school teachers use the midterm break to go skiing or catch up on corrections: others go about qualifying for the Olympics. And after some considerable improvement and room to spare Kevin Seaward has put himself first in line for selection for the marathon at the Tokyo Games this summer after clocking a lifetime best of 2:10.10 at the Seville Marathon.

Seaward also moved himself to number two on the Irish all-time marathon list, second only to John Treacy’s Irish record of 2:09.15 set 33 years ago in Boston. More importantly, he finished well inside the 2:11.30 automatic qualifying time for Tokyo – after already running the classic distance at the Rio Games in 2016.

The Leicester-based teacher, from the St Malachy’s Club in Belfast, also improved by some distance his previous best of 2:13.39 set in Berlin last September, the 36-year-old also taking over the Northern Ireland marathon record.

That had stood to fellow Belfast runner Paul Pollock since December, when he came out in the Valencia Marathon and also ran a new personal best of 2:10.25, also inside the automatic Tokyo time. Last month in the Houston Marathon, Stephen Scullion also ran a personal best 2:11.52 and more crucially nailed fifth place, thereby earning a Tokyo qualifying sport by virtue of a top-five finish in a Gold Label marathon such as Houston.

Seaward’s 2:10.10 left him in 24th place, as for the first time in history the top 14 men’s finishers all ran under 2:08. It means Ireland now has its full quota of men’s qualifiers five months out from Tokyo. That event will actually be taking place in Sapporo, 800km north of Tokyo, after the International Olympic Committee (IOC) deemed the conditions there to be less gruelling come the height of the Japanese summer.

There may yet be a selection dilemma for Athletics Ireland should any more Irish men hit the qualifying mark, Sean Tobin among those still eyeing up a shot at the marathon time in the coming weeks.

What Seaward, Pollock and Scullion also share in common is that all three were wearing the Nike Vaporfly Next% racing shoe, which has caused some controversy for contributing to the drop in marathon times across the board over the last three years.

Seville bills itself as one of the flattest and fastest marathon routes in Europe, still it broke new ground on Sunday with those 14 sub 2:08s, the winning time of 2:04.46 also a course record for race winner,Mekuant Ayenew from Ethiopia. In addition to qualifying times, and potentially qualifying rankings, the Olympic marathons are now on course to surpass the original quota of 80 athletes per race.

Ireland's Hugh Armstrong also came away from Seville with a significant personal best, the Mayo athlete clocking 2:12.26 in only his second ever marathon to improve on his best of 2:14.22 run in Dublin last October.

Fionnuala McCormack remains the only Irish woman in line for a marathon selection in her fourth Olympics, when in Chicago last October, a month after her 35th birthday, she produced one of the runs of her life, finishing a superb fifth in 2:26.47, carving almost four minutes off her personal best.

Elsewhere, Michelle Finn moved one step closer to qualifying for another Olympics in the 3,000m steeplechase, running a personal best of 9:38.04 to win the Sydney Track Classic, improving on her previous best of 9:41.23.