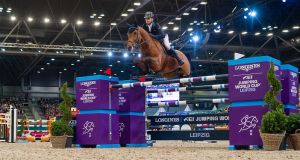 The Tipperary native was one of 16 riders who progressed to the second round of the five-star competition and one of eight who recorded a double clear over the Frank Rothenberger-designed track.

Lynch started competing GC Chopin’s Bushi midway through last season and Sunday’s win came just a week after the combination had finished second in the Longines Grand Prix at Basel in Switzerland. “I’m delighted with my horse,” commented the rider. “We are slowly getting to know each other. In Helsinki we were clear and then he stopped in the jump-off. Then I took him to Paris and he did the same, so it’s been up and down for us.”

Captain Brian Cournane just failed to complete an international double for Ireland on Sunday when he finished second in the 1.45m Grand Prix at Wellington in Florida.

Riding his own and Christine and Robert Stiller’s Irish Sport Horse mare Penelope Cruz, a 12-year-old bay by Ustinov, Kerry-born Cournane was home in 37.719 as the USA’s Andrew Welles recorded the fastest of nine double clears on Brindis Bogibo (36.589). There were 67 starters.

The dates and venues for the Irish show jumping team’s 2020 Longines FEI Nations’ Cup campaign in Europe Division 1 have been confirmed with their first points-scoring outing under new manager Michael Blake coming at La Baule in France on Friday, May 15th. The following weekend, the team will be in action at St Gallen in Switzerland before travelling to Rotterdam, The Netherlands from June 18th to 21st.

Each team has four points-scoring opportunities in Europe Division 1, with Ireland’s last chance coming on home soil in the Nations’ Cup competition for the Aga Khan trophy at the Dublin Horse Show, which this year, because of the Olympic Games, takes place from July 15th to 19th.

While not part of the European Division 1 Series, Ireland will be in Nations’ Cup action as early as mid-February, with Blake leading out a team at Deeridge in Florida. That will be followed by a very busy couple of days at the start of March when Ireland will field teams in both Wellington, Florida and Abu Dhabi in the UAE.

Each Irish performance over the coming months will come under even more scrutiny than usual, with the Olympic Games in Tokyo looming large, and Blake is looking forward to what promises to be an exciting year.

“This will of course be a very important season for the Irish show jumping team with big challenges ahead,” said the Co Clare man. “Our first Nations Cup in Deeridge is just four weeks away and we will be hoping to get off to a good start. This year we will have a particularly strong squad to pick from with a lot of our riders in the USA for the winter and we will also be keeping a close eye on our riders based in Europe.

“We go into the season ahead as Longines FEI Nations Cup world champions, following our fantastic result in Barcelona last season, and will of course be aiming for good results in our points-scoring rounds at La Baule, St Gallen, Rotterdam and Dublin.”