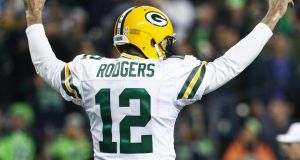 Week 11 takeaway: No relaxing in Green Bay after must-win loss to Seattle

In 2014, the Packers got off to a 1-2 start, with a 20-point loss to the Seattle Seahawks and a less embarrassing, albeit still disappointing, 19-7 loss to the Detroit Lions. The Packers ranked 28th in total yards at the time and fans were - to put it lightly - losing their collective minds.

Hearing the roars of the Green Bay faithful, quarterback Aaron Rodgers took to the radio waves and told everyone to relax. This team, he knew, was a Super Bowl contender, and not the team that lucked into the play-off picture a year earlier with an 8-7-1 record.

The Packers won 11 of their next 13 matchups and finished the season 12-4 after Rodgers’s command, eventually falling to the Seahawks in the NFC Conference Championship.

Fast forward four seasons, and Rodgers and the Packers sit in a familiar place. The team was 4-4-1 entering Thursday’s match with the Seahawks, facing already long odds to secure a play-off spot in the crowded NFC.

A loss would significantly decrease the team’s Super Bowl chances, and Rodgers knew this. He also knew that even Green Bay’s loyal-to-a-fault fanbase might give up on the season if the must-win match did not go as planned.

The Packers had a chance to win the game late in the fourth quarter on Thursday, but questionable offensive play calling by head coach Mike McCarthy and porous late-game defence sunk the team, as they have many times before.

McCarthy’s most questionable call came during what turned out to be Green Bay’s final possession, when the head coach elected to punt on fourth and two with 4:11 on the clock from the Packers 33-yard line. With only one timeout and the two-minute warning remaining, McCarthy was gambling that his defence would stop Seattle and give Rodgers one last shot to win the match.

Green Bay’s head coach “played the numbers,” as he would say after the team’s gut-wrenching 27-24 loss, but it took Seattle only four rushes - three by running back Mike Davis for 16 yards and one eight-yard rush by Russell Wilson - to ice the game against the fatigued Packers defence.

Rodgers never got the ball back.

The decision to let the most physically gifted quarterback in the history of the NFL - equipped with the mobility to scramble, a rocket arm and excellent decision making skills - attempt a fourth-down conversion seemed obvious, despite what the numbers said.

When a team has a generational quarterback, they should ride or die on his arm, knowing any championship success will be tied to each completion, interception and touchdown he throws.

A head coach electing to trust the defence in lieu of counting on the star quarterback to make a play when the game is on the line will be vilified accordingly, and suffice to say, Mike McCarthy is feeling that heat now.

Rodgers did everything in his power to win Thursday night’s match, as he always has. He finished with 332 yards, two touchdowns and zero interceptions. He completed 70 per cent of his passes, and his passer rating was 128.8, his second-highest of the season.

He finished the game watching from the sideline as the Seahawks moved a game up in the play-off picture, while his team floundered on the border of contention and mediocrity.

Any team with the most physically gifted quarterback of all time should be in Super Bowl contention every season, no questions about it.

The fans know it. Green Bay’s front office knows it. Rodgers knows it.

And perhaps most of all, McCarthy knows it.

Loyalty only lasts so long in this league, especially in Green Bay where football is everything.

The mystique of 2010’s Super Bowl win has worn off and there will be no more excuses for this football team. It appears they will have to run the table to save McCarthy’s job, if a decision on his firing has not already been made.

No fan is relaxing in Green Bay this time around, and with the team’s continued disfunction this season, who could blame them.

The Steelers attack looked anemic through three quarters against the Jaguars. Big Ben Roethlisberger threw three interceptions, and the team was trailing 16-6 heading into the final quarter of play.

Miraculously, Pittsburgh’s attack found life in the fourth quarter, as the team scored two consecutive touchdowns, capped by a Big Ben one-yard touchdown run with four seconds remaining. Pittsburg completed the unlikely fourth-quarter comeback and moved closer to home-field advantage in the play-offs. Jacksonville, meanwhile, all but guaranteed they would not be playing competitive football in January this year.

Matt Ryan finished Sunday’s match against the Cowboys with only one interception, thanks in large part to Julio Jones’s effort on a late first-half pass break-up. On second and eight from the Atlanta 42, Ryan tossed a 45-yard prayer of a pass downfield to Jones, but the ball floated into the arms of Cowboys safety Jeff Heath for what looked to be a certain interception. Julio was having none of that, however, and leveled Heath with one of the hardest hits - and best effort plays - we’ve seen this season to dislodge the ball. It might not have been one of Julio’s spectacular catches, but at least it was not a turnover.

The Packers travel to Minnesota to take on the division rival Vikings in what will be a must-win match for Aaron Rodgers and Green Bay. The Packers - who could very well be playing their last meaningful match under head coach Mike McCarthy - need the victory to keep their slim play-off chances alive. The Vikings will look to keep pace with the Chicago Bears in the NFC North race.