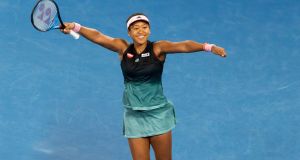 If Naomi Osaka goes on to add the Australian Open title to the debut Slam title she won in Flushing Meadows four months ago, she might spare a passing nod of gratitude for the player she beat there in extraordinary circumstances, Serena Williams.

There were moments in her semi-final win over Karolina Pliskova on day 11 of this tournament when she was in danger of surrendering dominance to the Czech (who had come back from 1-5 in the third to beat Williams two days earlier, snuffing out an Osaka-Williams rematch). But, as in New York, it was apparent that Osaka was again sound under pressure.

In the US Open final, she had the meltdown of Williams to deal with, and she handled that with the ice-cool aplomb, emerging from the unedifying episode as a dignified young champion on all fronts. This examination was more physical than mental.

On a blistering hot Thursday afternoon, she turned back the cooler, more orthodox challenge of Pliskova, an elegant and dangerous foe in tight corners, who was rattled by Osaka’s astonishing onslaught in the first set and, after mounting a fightback to level, could not crack her defence in the third.

Pliskova was effusive later in her praise of Osaka.

“She played an unbelievable match – to be honest, maybe the best in her life. I don’t think she can repeat a match like this. I don’t think I actually did much wrong. I had some chances, of course I had. But the chances, they were not in my hands at all. There was not much I could do.”

Osaka, never less than candid, smiled and responded: “I don’t necessarily think I played the best I’ve ever played. What I take away from this is that I never gave up. That’s something that I’m really proud of.”

If Osaka holds her resolve in the final against two-time Wimbledon champion Petra Kvitova on Saturday, she will make a statement that would lift her from precocious and interesting newcomer to recognised elite champion.

When it became obvious early in their semi-final that Pliskova could not do to Osaka what she had done to Williams, the final, the tournament and the game in general took on a different complexion.

Osaka is not just a lovable cross-culture kid with a vigorous, high-level game and nice line in post-match quotes. She has matured into a threat to everyone in women’s tennis, here and across the Tour.

In the earlier semi-final, the first reality check of the day kicked in. Danielle Collins had served an acceptable 11 double-faults in her first five matches, but added two in the space of four games, the nerves of a big occasion strangling her best work.

Kvitova, bringing bigger weapons in all departments, attacked her second serve relentlessly, but Collins found a way to stay on level terms after four games.

They exchanged breaks in-mid-set, but in the clink and shift of gears that control the roof above, an outdoor tournament went indoors at four-all. The beating sun had pushed the thermometer to 35C (it would continue on to near 40C) and into the tournament’s danger zone – but there was still plenty of heat coming off both rackets.

It will be hotter on Saturday, Much hotter. But the debate about use of the roof is not as simple as some would suggest.

Of course, the health of the players is paramount, as is that of the officials and ballkids – although the latter live in this heat. It is not as novel to them as it might be to visitors from the Northern Hemisphere. If the roof is to be used, it should be to the guidelines already set, not the emotional whim of concerned onlookers.

Kvitova grew up in the Czech Republic and, as they progressed in the protective enclosure created by the roof switch, she looked increasingly more comfortable against the Floridian, who is used to the sunny conditions.

Collins was perfectly within her rights to insist later: “It is what it is. That’s what they do, no matter what the situation is. If it’s really hot, they need to start the match the way it’s going to finish. It certainly changed a little bit of the rhythm in the match. Honestly, I like playing in the heat.

“Don’t get me wrong, it certainly has its challenges. I grew up in Florida and am used to it being really hot all the time. So I embrace that very well. Indoor tennis is a different game.”

Collins, who does not hide her emotions, gave the chair umpire Carlos Ramos grief over a legitimate ruling on Kvitova’s serve, but should have trained her frustration at Kvitova, who now punished her short balls to take the first set.

Collins’s discipline slipped again at the start of the second, arguing an unwinnable point with Ramos, then changing rackets for no apparent reason with two break points against her. She saved the first but dumped a backhand, and Kvitova started to ease clear.

Kvitova brought all her pedigree and experience to bear now on her rattled opponent, racing to then serving out the match.