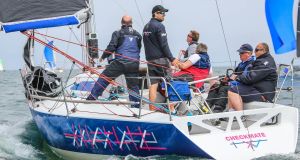 Dave Cullen’s Howth Yacht Club world champion half-tonner Checkmate XV was named ICRA’s Boat of the Year in 2018. Changes to the format of the award will be made in 2019. Photo: David O’Brien

With entries to open for the 2019 National Championships next week at the Royal St George Yacht Club on Dublin Bay, the new Commodore of the Irish Cruiser Racing Association (ICRA) is ushering in significant changes to competition rules and format.

The moves come after a 2018 hiatus following the cancelling of the championships in Galway Bay last August due to access problems at that harbour.

Among the changes coming from Richard Colwell’s new committee is a predetermination of often divisive class bands, so competitors will know in advance what type of fleet to expect. Same boat types are guaranteed to race together.

There is a removal of restrictions on professional sailors in all classes given the growing number of quasi-pros around including coaches with recent rule changes.

There will be a minimum specification for venues to include berthing access, on water judging, equipment inspections, in a bid to avoid a repeat of last year. Significantly, the event can be part of a larger regatta where traditionally it has been stand-alone.

A variable entry fee will apply depending on the size of the boat instead of the historic flat fee.

In other ICRA changes, its boat of the year award is to get a revamp and a new formula for selection will be available to boats from all around the country based on combined regatta results.

There will also shortly be a release about new initiatives for pathways and funding for Under 25 teams.

Ireland will have two new foiling Figaro 3 race boat entries when France’s La Solitaire URGO Le Figaro race returns to Kinsale in June, after an absence of nearly a decade from the West Cork port.

The south and east coasts are back on the Le Figaro course this summer for the 50th edition of the solo classic when the fleet navigates the Fastnet Rock in a leg of 550 miles before a second leg in the Irish Sea.

The Irish port will be the stopover in the first of four legs when the race starts from Nantes and calls to Kinsale on June 8th/9th. It will be the 20th time the race has sailed into Kinsale, more than any other port in the race’s half century history.

Both Meath’s Tom Dolan and Joan Mulloy from Mayo, who competed in the 2018 race, are expected to take on the 2000-mile challenge again.

In an exceptional year for Irish interest, the race also features a long leg along the south and east coasts round the Isle of Man, meaning at least half of the two -week marathon will be raced in Irish waters.

Fifty years on from Bruce Kirby’s ‘million dollar dinghy doodle’, Laser dinghy racing has never been as popular in Ireland, with thriving Frostbite scenes in Howth, Dun Laoghaire and Cork Harbour this month.

Yet to stand still is to go backwards when the likes of the rival RS Aero are pushing the envelope, and class chiefs readily admit the next half-century won’t be about “white sails on aluminium masts”.

With 29er designer Julian Bethwaite’s radical C5 rig, poised for competition trials, and Project ARC in the pipeline from builder Laser Performance, the international class association has issued a statement to address ‘speculation’ about its plans for the future of the Olympic class boat and has promised that for the 4.7, Radial and Standard classes, there will always be ‘controlled, incremental evolution’.

But with a total of eight rig options in the offing, will Kirby’s original idea for the ‘beach-boat’ survive?

Tim Magennis, the Dun Laoghaire traditional and classic boat campaigner was awarded honorary life membership of the internationally-represented Old Gaffers Association at its Annual General Meeting in London this week.