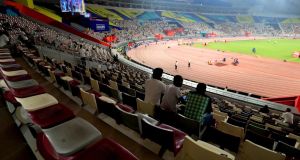 A general view of empty seating in the stadium during the Women’s 200 Metres Heats on day four of the IAAF World Championships at The Khalifa International Stadium, Doha, Qatar. Photograph: Mike Egerton/PA

Did you see that?

They came and were heard with a little more clamour this time, and were duly treated to a World Championship 5,000m for the ages – the team of Ingebrigtsen brothers from Norway attempting to topple the might of East Africa. But in the end were left bowing to the Africans’ enduing superiority on another hot Doha night.

Down the back stretch for the last time, it was Jakob, just turned 19 and the youngest of the three Ingebrigtsens, suddenly in front, looking to become the first European-born athlete to win this title since Eamonn Coghlan’s inaugural win in 1983. Then east Africa suddenly struck back.

Coming into the home stretch, Ingebrigtsen wasn’t just slowing but wobbling and eventually spilled over the line in fifth – another Ethiopia Telahun Haile Bekele getting past him in fourth. Did he go too soon?

His coach and father Gjert suggested afterwards that he did, only there’s no denying his effort was complete. Edris won with a season best of 12:58.85, Barega clocked 12:59.70, Ingebrigtsen falling over the line in 13:02.93.

He’s not finished yet though, and will be back on the track later in the week looking to become the first European athlete to win the 1,500m since Steve Cram also win the inaugural title in 1983. For now the last non-African born athlete to claim any medal in the 5,000m remains Australian Craig Mottram, who won bronze back in 2005.

It was the first time at a World Championships that three brothers – 28-year-old Henrik, 26-year-old Filip, and Jakob – made the 5,000m final. Filip was in a good position before dropping out with 600m to go; Henrik was trailed off early and finished 13th in 13:36.25.

Filip has already broken some of the African dominance in the 1,500m, winning bronze in London two years ago; Jakob has improved his best times this summer to 3:30.16 the with biggest kick and confidence of all the brothers he’s still capable of winning gold in that event.

Norway did still finish the night with a gold medal, Karsten Warholm producing another textbook run over the 400m hurdles to defend his title in 47.42 seconds, holding off the fast-improving American Rai Benjamin (47.66), with Abderrahman Samba winning a first medal for host nation Qatar in third (48.03). Ireland’s Thomas Barr, incidentally, has a best of 47.97.

Yet the night belonged to the enduring might of east Africa in other ways too.

Beatrice Chepkoech from Kenya showed exactly why she’s the world record holder with a gun-to-line victory in the 3,000m steeplechase, producing a championship record of 8:57.84, with the American Emma Coburn winning silver to with gold from 2017; Gesa Felicitas Krause from Germany ran a national record of 9:03.30 to win bronze.

The women’s 800m was without defending champion Caster Semenya, the South African no longer eligible to compete in the distance under the IAAF rule on athletes with differences in sexual development (DSD), but still the African dominance remained there too.

No Ugandan woman has won a gold medal in World Championship history, only into the last 100m Halimah Nakaayi made sure of it when gunning down the American Ajee Wilson win the title in a national record of 1:58.04; Raevyn Rogers past her American team mate to win silver in 1:58.18, Wilson third in 1:58.84.

That IAAF rule on DSD may still come under some scrutiny in Doha: it currently only applies in events from 400m to the mile, and Aminatou Seyni, up to know specialising in the 400m, moved down a distance to qualify from her 200m heat in a new national record for Niger of 22.58. Britain’s Dina Asher-Smith was the fastest qualifier with her 22.32, only Seyni appears to have a lot more in reserve.

No joy there for Ireland’s Phil Healy, who finished fifth in her heat in 23.56, short of her season best of 23.04, her season curtailed early on with a broken bone in her foot.

Despite the withdrawal of the two top-ranked athletes in her heat, Marie-Josee Ta Lou from the Ivory Coast and the Dutch Dafne Schippers, Healy was unable to land one of the top three qualifying spots, the race by Anthonique Strachan of the Bahamas in 22.86.

“The whole season hasn’t been the ideal set up but I’m grateful to be out here competing against the world’s best,” she said. “It wasn’t ideal preparation breaking my foot in April and it has a knock-on for the whole season.”